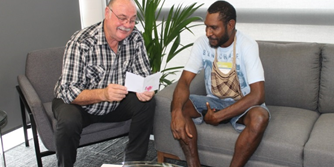 A TORRES Strait Islander family shattered by Tuberculosis hopes that a public appeal to raise money for DNA testing will enable a father and his three children to be permanently reunited in Australia.

Leichhardt MP Warren Entsch has met with the family and pledged his support for what he described as an extremely sad and complex situation.

“I remember being shocked when 32-year-old Sania Wosomo, a mother-of-three originally from Saibai Island, passed away in Cairns Hospital in September 2014 from complications arising from advanced tuberculosis,” he said.

“I understand that Sania was a relative of Mareta Wosomo, who was the first Queenslander to die from drug-resistant tuberculosis in April 2013. Now, Sania’s daughter Erica, 14, is being treated in Cairns for the same strain of TB.”

Treatment for MDR-TB is a complex regimen with multiple anti-microbial drugs administered over a 12- to 24-month period. As Erica, who usually lives on Saibai, is an Australian Citizen, her treatment is covered by Queensland Health.

“Erica’s father, Jamija Olewale, is a Papua New Guinean citizen who was able to travel regularly to Saibai Island to be with Sania when she was alive and their three children,” Mr Entsch explained.

“He’s now travelled to Cairns to live with Erica whilst she undergoes her treatment and as he is her primary carer, it’s important that he remains in Cairns while her treatment continues.

“Jamija will need to apply for permanent residency so that he can eventually live on Saibai with Erica and her two younger brothers. The urgency here is for us to keep him in Cairns at the present so he can keep providing this essential care for Erica.”

However, in order to remain in Australia, Jamija has to show that he is the legal father of all of the children by producing all three birth certificates.

“Often with Torres Strait Islander births with PNG fathers, their name and particulars are not put on the children’s birth certificates and unfortunately this is the case with Erica and her brothers,” Mr Entsch said.

“In order for Jamija to have his name put on their birth certificates he is required to do a DNA test. Although is a simple test carried out by DNA Queensland, it is very costly.”

Mr Entsch said that Jamija needs to raise approximately $1500 to cover the cost of the DNA testing and then apply for the three children’s birth certificates – confirming he is their father – before he is able to apply for an Australian visa to remain in Australia.

“I’m hoping that the Far Northern community will recognise how important it is for this family to be reunited and have a permanent, secure future in Australia,” he said.

“Tuberculosis is a truly awful disease and when you consider its prevalence in PNG and the incredible challenge of successfully treating sufferers, in many ways we are fighting a losing battle.

“The Wosomo family has had a very challenging time but here is one way that we can make an immediate and real difference to their lives.”

Mr Entsch is encouraging any members of the public, organisations or businesses who would like to help to make a donation to the Leichhardt Benevolence Account: