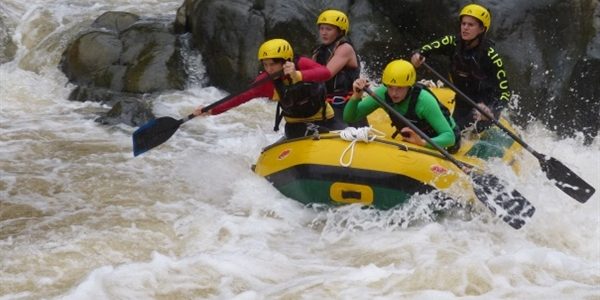 LEICHHARDT MP Warren Entsch is encouraging local businesses to throw their support behind a group of inspiring young white-water rafters from Cairns, who are the first junior team in Australia to qualify for the World Championships.

As a result, they have been invited to the International Rafting Federation White Water World Championships, to be held in Brazil in October 2014.

“This is a fantastic achievement and an incredible opportunity for these Year 11 students,” Mr Entsch said.

“They had never done white water rafting before starting this program, but now they’ve embraced it whole-heartedly; training every day ? if not twice a day ? as well as going to the gym, swimming and kayaking.

“They’ve also had to deal with challenges like flooding, cyclones and crocodiles in order to get on the water to train ? that’s no mean feat!”

Redlynch State College is a ‘school of excellence’ in recreational outdoor studies and aims to continue the rafting program in years ahead ? 18 kids are already keen to take part in 2015.

“The program has a real holistic focus ? these kids have learnt about the importance of fitness and good nutrition, discipline and positive attitude. They’re outside rather than hanging at the mall or playing on their phones, and this has been reflected through changes in their behaviour,” Mr Entsch said.

“It’s also another example of the Cairns region having the ability to produce world-class sportspeople, and how vital it is to have the necessary infrastructure and support available for promising young competitors to be able to pursue their dreams.”

The team, which competes as boys and girls separately, needs to raise $35,000 for each ? a total of $70,000 to cover the expenses of getting to Brazil and competing.

“I understand they are trying to find sporting grants but corporate sponsorship would go a long way towards helping these kids represent Australia in this exciting sport,” Mr Entsch said.

“If anyone can assist, I’d urge them to email me at warren.entsch.mp@aph.gov.au with details.”