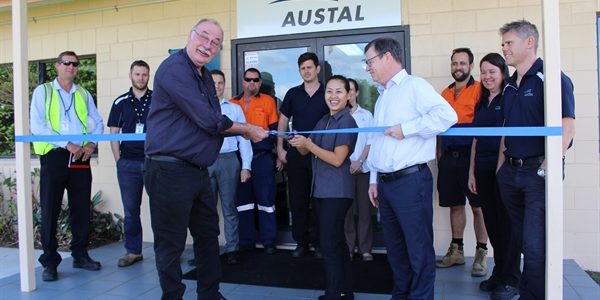 LEICHHARDT MP Warren Entsch has officially opened Austal’s new office in Portsmith today, congratulating the company on the move which he says reinforces its commitment to our region.

Austal has been awarded the $24 million contract by the Commonwealth Department of Defence to provide support services for the existing Pacific-class and new Pacific Patrol Boats (PPB) for an initial seven years in Cairns, with support services contracted to start early 2018.

“Austal is now part of Cairns and the establishment of a permanent base here has helped to lock in sustainment activities ? and local job opportunities ? for decades to come,” Mr Entsch said.

The Cairns Sustainment Facility is headed by Kim Metcalf, with more than 10 local employees at present ? a number of whom were offered positions by Austal after Serco exited Far North Queensland. Once the PPB contract starts, this will increase to around 30 positions.

“I’d really like to acknowledge Austal for taking on these Serco employees; we could easily have lost these positions and the knowledge and expertise that came with them. So it’s great to see that Austal has recognised their value,” Mr Entsch commented.

“Today’s opening of the Austal office, and the forum that was held afterwards to give local industry information on the SEA1180 Offshore Patrol Vessel Project and the opportunities to supply, builds on a range of recent developments in the defence industry which are very exciting.”

Mr Entsch has also been working closely with the Deputy Secretary of Capability Acquisition and Sustainment within the Department of Defence, who recently visited Cairns to work with Ports North on the proposal for a Common User Facility and 3000 Tonne Syncrolift.

“This Syncrolift would give us the ability to have six Offshore Patrol Vessels on hard stand at any one time. It would be built here in Cairns, we have a site identified and ideally it would be ready to operate when the first OPVs come of the production line in early 2018,” Mr Entsch said.

“This will create ongoing opportunities for Cairns in both Defence and Border Force vessel sustainment and maintenance, helping local industry to avoid the peaks and troughs that come with build-only contracts and growing the pie for everyone involved.

“The Department has engaged Thales Australia to do the planning for this, they will come up with recommendations and I hope the proposal could even be signed off by Christmas.”

Other relevant maintenance/sustainment activities for Cairns include:

– Thales’ new In Service Support contract for the Armidale Class Patrol Boats, which started on 1st July. The contract has a potential value of more than $55 million per annum, with existing sustainment activities in Cairns to be maintained;

– Existing contracts for maintenance and sustainment of Border Force’s Cape-class patrol boats and the hydrographic ships that are currently based in Cairns ahead of their decommissioning;

– $130 million for upgrades at RAAF Scherger, near Weipa, over the next two decades to support the introduction of the F-35A Lightning II Joint Strike Fighter;

– The basing in Cairns of the new replacement hydrographic vessel; and

– $420 million over two decades for planned improvements to HMAS Cairns – however Mr Entsch is working with Advance Cairns on a bid to shorten this spend by 10 years.