Cairns “Kids Alive – Do The Five” with Laurie Lawrence 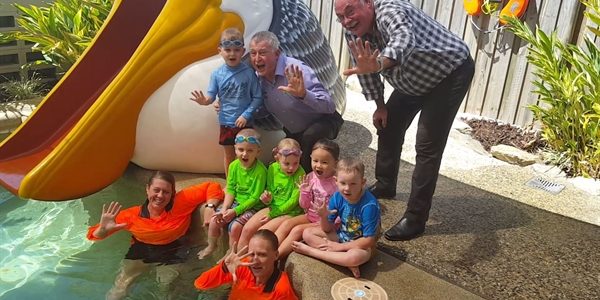 Federal Member for Leichhardt Warren Entsch says: “We’re incredibly fortunate to have someone as passionate as Laurie launching the Australian Government’s new educational curriculum for children aged five and under.

“The resources include songs, videos and books to help teach water safety in early childhood settings, and will improve water safety at the beach, in homes, around pools and on farms.

“They’re designed to educate children about water safety whether they live in urban or rural areas, and whether they swim at the local pool, head to the beach or down to the river,” said Mr Entsch.

The Federal Government supports the Australian Water Safety Council’s 2008 goal of halving drowning deaths across all demographics by 2020, and the 2015 National Drowning Report produced by the Royal Life Saving Society Australia shows there is still work that needs to be done.

“More than half died in swimming pools – and only because an adult wasn’t supervising.”

Laurie Lawrence said: “Whether you’re swimming at the Cairns Lagoon, at one of the waterholes around the region, or in the soon-to-be-completed Tobruk Memorial Pool, water safety is critical if we are to reduce drownings.

“On average, one young child drowns every fortnight in Australia, and the emotional impact of such an accident lasts a lifetime.

“The Kids Alive – Do The Five water safety program is about educating mums, dads and kids about the five important steps to reduce the risk of preschool drowning: Fence the pool; shut the gate; teach your kids to swim – it’s great; supervise – watch your mate; and learn how to resuscitate,” said Mr Lawrence.

The release of the new Living With Water resources is a significant step in the Australian Government’s Saving Lives in the Water initiative and builds on other key water safety programmes including:

Mr Entsch said: “Reducing drownings in Australia is a duty all of us need to be involved with, and young families in particular have a crucial role to play through educating kids about water safety and always supervising them around water.”