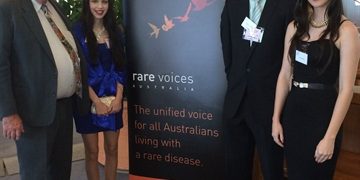 RARE diseases affect 1.2 million Australians yet many sufferers don’t receive the treatment and support they need due to a lack of specialist knowledge within the medical system.

This week, however, a young Cairns woman has taken her story directly to Parliament in a bid to raise awareness of the need for a new National Rare Diseases Plan in Australia.

Elyshia Hickey (19), her sister Emily (15) and mum Sherri travelled to Canberra yesterday to attend the launch of Parliamentary Friends of Rare Diseases, which – in partnership with the advocacy group Rare Voices Australia – will promote issues relating to rare diseases.

Elyshia and Emily both suffer from a condition called Ehlers-Danlos Syndrome (EDS), a life-long, degenerative disease that affects the collagen in their bodies ? literally the ‘glue’ that holds bones and joints together.

The family have appeared in media in the Far North advocating for a new National Rare Diseases Plan, which would recognise and address the unique needs of patients seeking treatment and support through national health systems.

Leichhardt MP Warren Entsch, who has supported the Hickeys in their campaign, said it was “absolutely inspirational” to hear Elyshia tell her story to the crowd of Members and Senators.

“Young Elyshia was just sensational, speaking of her journey and the challenges she has with EDS,” Mr Entsch said.

“One of the symptoms of EDS is that it affects the collagen in their body so everything is like jelly – their joints dislocate and disjoint, from fingers to wrists, elbows, hips… they are constantly in pain.

“Despite suffering from this very debilitating disease, Elyshia was able to get up from her wheelchair and walk up to the podium and deliver a speech with her sister supporting her.

“When you listen to her story, and the way in which she delivered it to a large crowd of people, asking them for their support in getting recognition for rare diseases, there wasn’t a person in the place who wasn’t 100 per cent behind her.

“It was absolutely amazing and very, very moving.”