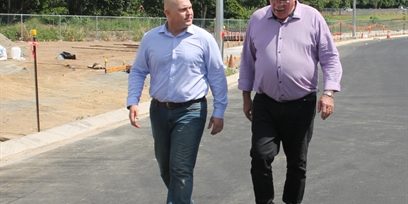 The $58 million upgrade of the Bruce Highway from four to six lanes between Robert Road and Foster Road was officially opened today – three months ahead of schedule.

Federal Minister for Infrastructure and Transport Darren Chester commended the early completion and said the project would provide significant benefits to Cairns and Far North Queensland.

“These works will be a game changer for the more than 36,000 motorists who use this section of the Bruce Highway to travel into Cairns each day,” Mr Chester said.

“Widening this stretch of the Bruce Highway between Robert Road and Foster Road from four to six lanes is going to cut travel times for commuters and definitely improve safety for all drivers.”

Treasurer and Member for Mulgrave Curtis Pitt said the upgrade, which included $11.6 million from the State Government, had boosted employment, with an average of 147 direct jobs created over the life of the project.

“One of the best thing about living in the Far North is that our roads are mostly congestion-free and I’m determined to keep it that way,” Mr Pitt said.

“Work on the project began in June 2016, which formed part of the Cairns Bruce Highway Upgrade master plan. Other project works related to the Cairns Southern Access Corridor project include a new link between Progress Road and the Swallow Road Industrial Estate, key intersection upgrades and improved access to White Rock.

“The increasing population and increasing number of cars on our roads have caused headaches to the south of the city for some time but with this upgrade, locals will allow a quicker commute. That will allow people more time to spend off the road, doing what they enjoy with their family and friends.”

Federal Member for Leichhardt Warren Entsch said residents and businesses would notice improved traffic flow, reliability and safety on the 2.1km stretch of the highway.

“We are all about making the Bruce Highway safer for all drivers, and increasing its capacity so businesses and industry can find new efficiencies and support local jobs. This project really will be of longterm benefit to Far North Queensland’s regional economy – particularly the freight and tourism industries,” Mr Entsch said.