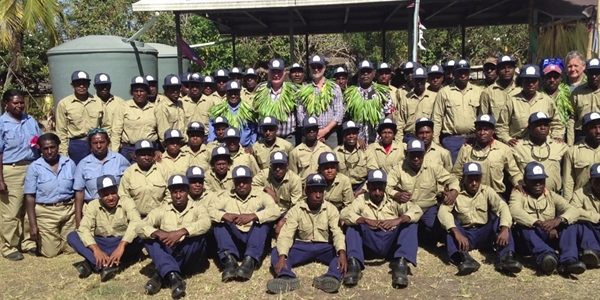 On Thursday, 52 trainees graduated from the Treaty Village Rangers Program at an event at Mabaduan Village on the South Fly coastline, just a few kilometres from Australia’s northernmost border.

The program is a key element of the Building Resilience in Treaty Villages, Western Province PNG initiative driven by the Cairns-based Reef and Rainforest Research Centre (RRRC) with support from the Australian Government.

The graduation was attended by Leichhardt MP Warren Entsch, Minister for Indigenous Affairs Senator Nigel Scullion, the RRRC’s managing director Sheriden Morris and chair Dr Ian Poiner, trainers from Inloc, representatives from the Australian High Commission in Port Moresby and the Department of Foreign Affairs and Trade, together with South Fly District MP the Hon Aide Ganasi, leaders from the Treaty Villages and more than 1000 community members.

“It was an amazing event,” explained Mr Entsch. “We were welcomed by the community leaders, traditional dancers and a massive crowd of people – one man I spoke to had travelled for six hours by dinghy to attend the celebration. I was particularly pleased to see my good friend Mr Kebi Sallee, the Ward Member for Sigabadura, who I’ve been working with for seven years now.

“As for the rangers themselves, it was very emotional to see the pride in their eyes and the smiles on their faces as they received their ranger caps, badges and certificates in front of their family and communities.

“I can’t congratulate the RRRC and Inloc enough for their fabulous work on this program, together with our Foreign Minister Julie Bishop MP for contributing pilot funding through Australian Aid,” he said.

“This is about building a platform for the delivery of health services in these communities. It’s come about because of my focus on TB, the lack of effective treatment in the Western Province and the threats this presented to Torres Strait communities and as far south as Cairns.”

Mr Entsch said that sanitation management in the villages was a constant challenge and was contaminating residents’ drinking water, and that prior to the RRRC program being implemented, there was little capacity in the five pilot villages to address broader health issues in the communities.

“There is no point in handing out pills to deal with illnesses in these villages if in most cases people don’t even have a clean glass of water to take them with,” he said.

He added that in the past, millions of dollars had been spent on programs in the Western Province with little focus on outcomes, leaving locals with no more capacity than they started with.

“We all want Australian Aid to be used efficiently, effectively and transparently and the Building Resilience in Treaty Villages program has absolutely achieved this,” he said.

“How? Because the local elected leaders now have a seat at the table and are making decisions on things that affect them. At the end of the day, this isn’t about the RRRC, Inloc or the Australian Government – we’re just the enablers.

“What’s making the difference is the people – we’ve got community members who are prepared to take leadership roles by putting their hands up for positions as rangers.

“Long after this program is finished, it will be the rangers and the elected leaders in these communities who will be continuing to make things happen.”

South Fly MP the Hon Aide Ganasi expressed his appreciation to all the agencies involved with the ranger training program. He also highlighted the close relationship between the South Fly and Leichhardt electorates and commended the advocacy of Mr Entsch on behalf of the region.

His sentiments were echoed by Senator Scullion, who acknowledged the close familial and traditional ties between the Treaty Villages, the Torres Strait Islands, and the two countries more broadly – 2015 is the 30th anniversary of the Torres Strait Treaty.

“In many ways, these rangers – the future leaders – are a lighthouse, not only to this region but also to the Australian region,” he said.

“Thank you so much for your leadership and this very special friendship.”

Mr Peter Papua, the Mabaduan Ward Member, said the new rangers were trail-blazers in the South Fly, and had created “a legacy in the history of our Treaty communities”.

He called on the government of Papua New Guinea to contribute financially to the continuation of the program, which would enable the remaining eight villages along the South Fly coastline to also benefit from increased community resilience.