Lock it in, Edmonton to Gordonvale works start on $481 million Bruce Hwy upgrade

You are here:
Media ReleasesUncategorized 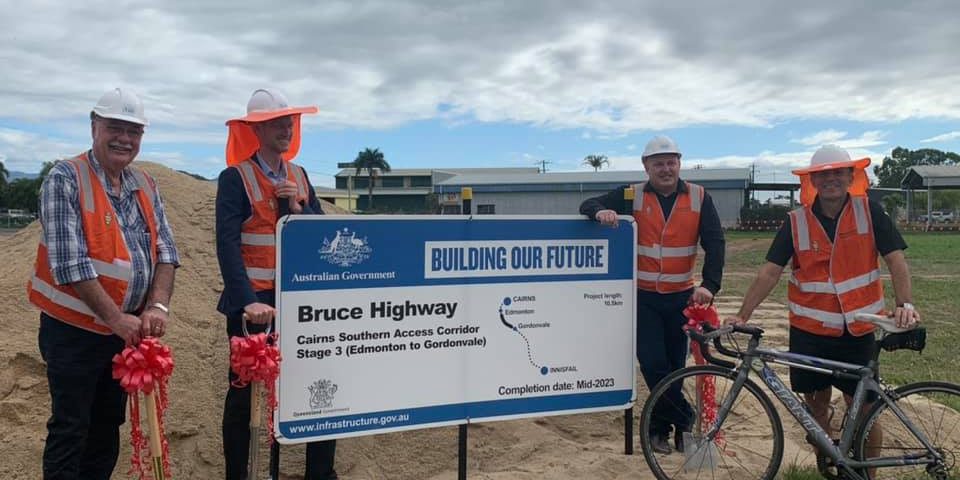 Works have started on Stage 3 of the Cairns Southern Access Corridor project between Edmonton and Gordonvale – the Far North’s biggest road project.

Queensland Transport and Main Roads Minister Mark Bailey today joined Federal Member for Leichhardt Warren Entsch and State Member for Mulgrave Curtis Pitt to mark the start of the upgrade, which will double capacity on one of the Bruce Highway’s busiest two-lane sections and support 466 jobs.

Deputy Prime Minister and Minister for Infrastructure, Transport and Regional Development Michael McCormack said this is another example of the Australian Government getting on with delivering key infrastructure projects which will support jobs and boost the economy, particularly in regional areas.

“The southern suburbs of Cairns are growing fast and that is why the Australian Government has committed more than $840 million towards upgrading the Cairns Southern Access Corridor from Gordonvale to Cairns CBD,” Mr McCormack said.

“Not only will this project duplicate the highway, it will also deliver new service roads and partially close several intersections and direct accesses to the existing highway. This will improve traffic flow, increase the speed limit to 100 kilometres per hour and create a safer and more efficient Bruce Highway for the future.”

Mr Bailey said the project would also see a number of at-grade level crossings removed, a new overpass south of Maitland Road and a brand new alignment for the highway, tackling congestion on the major freight route and creating a pipeline of construction and supporting jobs for Cairns over the next few years.

“Thanks to Queensland’s strong response to the pandemic, the Queensland Government has been able to continue delivering our record $23 billion pipeline of road and transport projects – crucial to stimulating our economic recovery.”

“Cairns in a great place to live, be active and explore, so it is fantastic this project will also deliver a dedicated cycleway,” Mr Entsch said.

“All stages in the Cairns Southern Access Corridor upgrades are delivering a dedicated cycleway and when complete, cyclists will be able to safely ride all the way from Gordonvale into the heart of the Cairns CBD.”

State Member for Mulgrave Mr Pitt said start of works on the 10.5-kilometre upgrade start would be welcome news for growing communities in Cairns’s south and the region’s $9.6 billion economy.

“When the first sod is turned on a project of this scale, it signals a way forward and creates economic benefits for the whole community,” Mr Pitt said.

“Together with projects like the $127 million Cairns Shipping Development and Kate Street to Aumuller Street project, we’re strengthening supply chains, bolstering the economy and supporting more than 1,000 jobs.”

Changed traffic conditions will be in place intermittently from August this year.

Early works will involve removing vegetation and demolishing structures in the project corridor along the highway as well establishing a site office near Kern Street at Gordonvale.

The project is expected to be completed mid-2023, weather permitting.