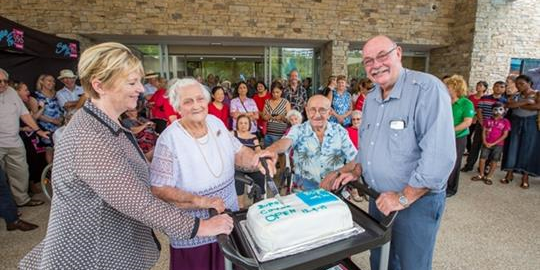 OLDER Australians in Leichhardt will benefit from a substantial increase in funding for aged care services, with the Australian Government announcing more than 17,000 new care places across the nation worth an estimated $910 million.

Following the announcement of the 2015 Aged Care Approvals Round, Leichhardt MP Warren Entsch welcomed news that 324 places had been created locally following a competitive application process carried out by the Department of Health.

“There is a strong demand for aged care in Leichhardt, it’s been a significant issue for several years now and something I’ve been working on closely with the Minister for Health, Sussan Ley MP,” said Mr Entsch.

“These additional places are essential as we look to ensure our elderly residents receive the quality care they deserve.”

The funding will either help expand existing services or create new places in priority areas of need.

“These include residential care places around Cairns and home care packages to benefit specific groups, including people who live in rural and remote areas, people who are financially or socially disadvantaged, veterans and dementia care,” Mr Entsch said.

“While these places aren’t likely to be coming online immediately, with the recent changes in aged care legislation I’ll be keeping a close eye on the provisional allocations to make sure that providers are working in a timely manner to get these beds up and running.”

This is the last ACAR to include home care places. From February 2017 funding will follow the consumer not the provider, allowing people to choose the care which suits their individual needs, to then direct funding to that provider.

“Australians want greater choice and control over the care they receive and the recent changes to home care that we’ve created do exactly that,” Mr Entsch said.

“These changes were a big part of our Reducing Red Tape agenda and mean that operators will be able to streamline some of their administrative processes and spend more time focusing on what they do best – helping older people who want to maintain their independence, and supporting those who need extra assistance.”

“Although the Mossman District Nursing Home wasn’t successful in its application for a capital grant, the Salvation Army Aged Care Plus has already set aside the funds needed to build the facility and construction will be starting later this year, which is fantastic news,” Mr Entsch said.

“When the facility is up and running it will have 50 beds available, 42 of which are the new places that were funded by the Federal Government in the 2014 ACAR round, plus eight that are currently allocated for aged care in Mossman Hospital.”

More information about the results of the 2015 Aged Care Approvals Round is available at www.dss.gov.au/2015ACAR

Applications for the 2016 ACAR round will commence in June and focus on the provision of residential aged care places and capital funding, as well as introducing, for the first time, short-term restorative care places.