Wildlife rescuers urged to keep up the good work 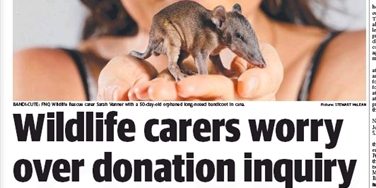 LOCAL wildlife carers have nothing to fear from the Government’s inquiry into the tax-deductible status of environmental groups, says Leichhardt MP Warren Entsch.

“I’ve checked with the Chair of the House of Representative Standing Committee on the Environment, Alex Hawke MP, and confirmed that this inquiry is about identifying groups on the environmental register who may be using taxpayer dollars – via the tax deductibility status – to run campaigns beyond protecting the environment,” Mr Entsch said today.

“It’s looking at the issue of potential illegality; where taxpayer-subsidised funds are being used for illegal activities, by organisations who claim to be doing environmental work – but the money isn’t being spent on the environment.

“It seems that some of these groups aren’t being totally open with people about how their donations are being used. In fact, we’re aware of examples where the money has been used to illegally block projects that have been approved.”

“The protesters were camped on a public road, which the company needed – and was lawfully allowed – to use. Because there had been previous violent protests, the WA police commissioner said the expense was justified.

“At the same time though, this is taking police resources off the streets in other areas – so there’s a social cost as well as an economic one.

“We have to make sure that organisations who are receiving tax-deductible donations are using those donations for direct environmental benefits, and for the purpose intended and expected by the community.”

Mr Entsch reassured local organisations such as FNQ Wildlife Rescue and Tolga Bat Rescue and Research that it was highly unlikely there would be any adverse impact on their operations.

“This is about environmental organisations showing us what they do on the ground,” he said.

“If they can show evidence of this, which our local wildlife organisations will easily be able to do, they have nothing to worry about and we want them to continue their great work.”

Mr Entsch also added that although the official deadline for making a submission has passed, the committee was very keen to make sure that all local organisations who want to have a say, are heard.