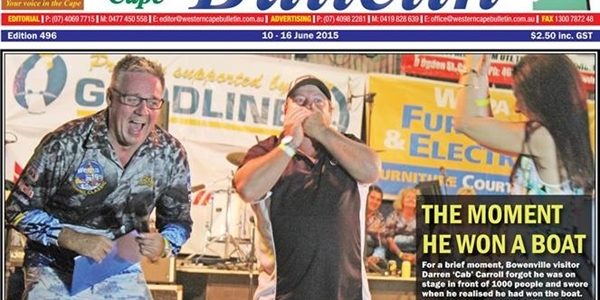 “Newspapers are a vital part of every community – particularly in regional areas such as Cape York,” said Mr Entsch.

“Whether I’m in my electorate office in Cairns, travelling across Leichhardt, or representing the Far North in Canberra, I always read ‘The Bully’ because it’s an invaluable way for me to stay up-to-date with the achievements and concerns of locals on the Cape.”

Mr Entsch said that while local news had been delivered to the Western Cape York Peninsula through a range of publications since 1966, the first edition of the Bulletin was published just under ten years ago on Thursday 1 September 2005.

He said particular congratulations go to the current owners, the Bousen family.

“Shane and Corey Bosen have shown a profound entrepreneurial vision combined with local pride,” he said.

“Through their four newspapers – The Torres News, The Western Cape Bulletin, The Arafura Times and The Cooktown Local News – they provide local jobs plus an unrivalled independent news source across much of Northern Australia.