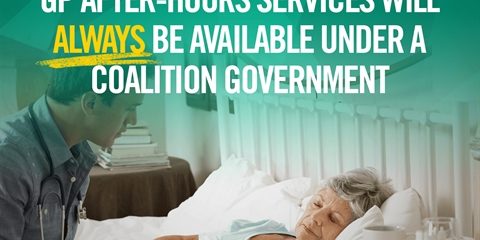 Federal Member for Leichhardt Warren Entsch has reassured Far North Queenslanders that patients needing urgent after hours medical care at home will always be supported under Medicare despite a review of after-hours services.

An independent doctor review of after-hours services has found a 150 per cent growth in the use of urgent after-hours was not driven by clinical need, but rather the emergence of businesses promoting these services. It also found these services have not taken the pressure off emergency departments including at Cairns Hospital.

“The big driver in the business model of many of these new after-hours doctor services is utilising the Medicare emergency item number,” Mr Entsch said.

“The rebate for a non-urgent home visit in the after-hours period is $74.95 per patient.

“An independent study by the University of Tasmania and the Royal Australian College of General Practitioners also found a lot of the services claimed as urgent are not genuinely urgent, with some only requiring a regular prescription,” Mr Entsch said.

In 2016-17, targeted compliance activity in after-hours resulted in over $1.3 million being voluntarily repaid by health professionals who acknowledged they had incorrectly billed the urgent after-hours items. This included 16 practitioners being referred to the Professional Services Review to investigate potential inappropriate practice in relation to after-hours services.

The Federal Government’s commitment to Medicare is rock-solid with funding increasing each year from $23 billion in 2017-18, right through to $28 billion in 2020-21. “This includes an extra $145.5 million for GP led after-hours services as outlined in the recent Budget,” Mr Entsch said.

“The Government has an absolute rock solid commitment to after-hours medical access, but we are also committed to ensuring that every service provider is genuine and that every doctor is up to scratch.”