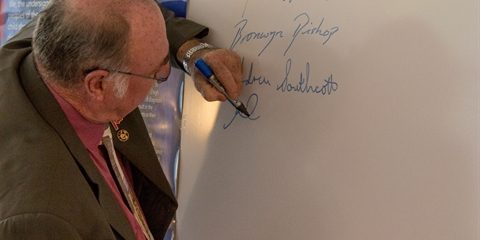 AHEAD of World Tuberculosis Day on March 24th, Leichhardt MP Warren Entsch has helped officially launch the Australian TB Caucus in Parliament – renewing the focus from Australian politicians on the need to address the burden of this disease in our region.

“There were 15 cross-party members that originally put our names to the Barcelona Declaration, the document that has been signed by more than 1,000 political representatives from 100 countries,” Mr Entsch said yesterday.

“Signatories commit to supporting R&D in new drugs, diagnostics and vaccines and demanding that every patient, regardless of age, sex, nationality or socioeconomic status, be able to access quick diagnosis and high-quality treatment.

“I’m pleased to say that as a result of this event we now have 100 representatives here in Australia that have signed the Barcelona Declaration and I’d urge every member and senator to do the same.”

Mr Entsch has been working with advocacy group RESULTS International AU and said he welcomed the opportunities through RESULTS and the TB Caucus to raise awareness about TB and to lobby for improved diagnosis capability, treatment and prevention.

“I, like many other Australians, believed that tuberculosis was consigned to the history books along with sanatoriums and iron lungs,” Mr Entsch told Parliament in a speech last night.

“My mum was treated for tuberculosis in 1963 and spent a year in the thoracic ward in Cairns. It had a massive impact on our family. She was separated from my siblings, and family members had to care for us.

“I was the eldest and old enough to be able to visit my mum and spend some time with her, but my three younger siblings were too young to do so, so they were not able to see my mother for a year, until after she was released.

“I thought that that problem had been solved and that tuberculosis was no longer an issue, but tonight I stand to raise awareness about the reality of tuberculosis in our communities today and in those of our neighbours in the Asia-Pacific region.”

“To put a local face on the statistics, in a very recent case, only a week ago I became aware that Cairns' Business Woman of the Year and head of the Reef and Rainforest Research Centre, who has done extensive work in the Western Province of Papua New Guinea, had been diagnosed with latent MDR-TB.

“That is so current and so close to our community. We have lost several people in my electorate in recent times, including a mother and daughter with tuberculosis from one of the outer Torres Strait islands. The grand-daughter is now being treated. It is a major issue, and this is why I am passionate about ending tuberculosis in our region. “

Mr Entsch added that during a visit to South Africa late last year with RESULTS, he met with a Dr Jennifer Furin from Doctors Without Borders whose comments on the burden of TB in Western Province were bleak. Having visiting Daru Island in October 2015, she said:

‘I have been working with TB for over 20 years. I have worked in prisons in Russia, in Siberia, and many other high-burden countries and in the most difficult of circumstances therefore nothing generally shocks me.

‘However, I was absolutely shocked and felt despair from what I saw in Daru, which was far worse than what I have ever experienced and the TB burden is horrific. Having said that, what is most despairing is the fact that with the right application this situation can be quite easily addressed.’

Mr Entsch ended by calling on the Australian Government to continue and consider increasing its contribution to the Global Fund during the next replenishment period, 2017-19.

“It is time that we acted on this, and I certainly call on the support of this parliament to make sure that we take those actions to address this very, very serious problem.”