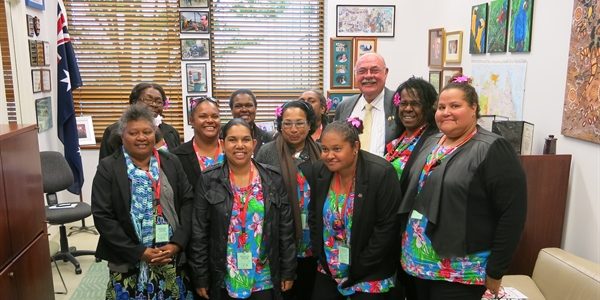 IT was ‘Question Time’ in Warren Entsch’s Canberra office today when the MP met with a group of inspiring local women taking part in the 2016 Torres Strait Women’s Leadership program.

They were are all keen to play more of a leadership role in their communities and took the opportunity to learn new skills and gain confidence through the program.

“I think your participation is very important, you will get a lot out of it if you listen and apply what you learn to your everyday activities,” Mr Entsch told the group.

“There’s no doubt that we need to encourage more women to take on leadership roles in the Torres Strait, as well as here in the national Parliament.”

The group initiated a lively discussion with Mr Entsch on issues such as the redistribution of electorates in Far North Queensland, improving local governance and the need for individuals to be educated about political processes.

He was also quizzed on his recent comments on traditional hunting, where he warned that vulnerable and endangered species like dugong could not sustain continued take.

Mr Entsch reiterated that he is not seeking a ban on traditional hunting, but on the commercial sale of turtle and dugong meat and the unnecessary cruelty shown to animals by a few hunters.

He also said that the frequent posting of disturbing images on social media by predominantly young hunters was upsetting and offensive for many Australians, and urged elders to play a more active role in teaching young people about appropriate take for cultural and traditional purposes.

This is the third year that Mr Entsch has met with program participants in his Parliamentary office.

Run through the Australian Rural Leadership Foundation and funded by the TSRA, the 12-day program sees the women take part in workshops in the Torres Strait and then visit Canberra to learn about political advocacy, meet with representatives and attend a graduation dinner.

“I also urged the group to establish an ‘alumnae’ for those who have participated in each of the three programs, so they can continue to meet, exchange ideas and build capacity,” Mr Entsch said. “I’ll certainly look forward to catching up with them when I visit the Torres Strait.”