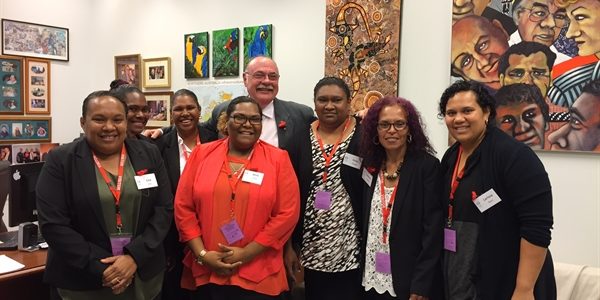 A GROUP of future leaders of the Torres Strait took inspiration from a visit to Parliament House in Canberra recently, meeting with their local MP Warren Entsch among other representatives.

Hailing from Thursday, Mabuiag, Mer and Yorke islands, the seven women were participating in a four-day Torres Strait Women's Leadership Program to expand their skills and networks and take knowledge back to their various roles in the Torres Strait.

Group member Lisa Lui said the group had been learning about what makes a good leader and how to work effectively with other professional women in the community,

“It’s about identifying our strengths and weaknesses, knowing how we can overcome barriers and challenges in our communities as Torres Strait Islanders, and having a go,” she said.

Mr Entsch said it was vital that more women put their hands up and take leadership roles in their communities.

“I really urge you to get out there – you have a lot to contribute and the involvement of women brings a whole other perspective and skill-set to good governance,” he said.

Mr Entsch cited examples of Mrs Margaret Mau, former Member for Dauan, Mrs Louisa Guise, former Member for Mabuiag, and Mrs Vonda Moar-Malone, Executive Director of Primary Health Care for Torres and Cape HHS on Thursday Island, describing them as “strong and courageous women who are prepared to have a go”.

“Coming from smaller communities like you do, I’d encourage you not to be intimidated because you have an opportunity to make an impact,” he said.
Group member Vera Havili said that through the course, the women had built up their courage and confidence, and were inspired to develop their skills further.

Mr Entsch also reiterated his support for gender balance in the workplace ? although he acknowledged that he “could be accused of going too far the other way” in that out of his eight staff across two offices, seven were female.