Statement on the death of Tnzin Delek Rinpoche 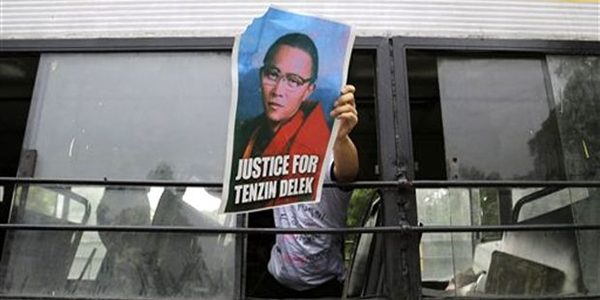 The Australian All Party Parliamentary Group for Tibet (AAPGT), led by the Hon Warren Entsch MP and the Hon Michael Danby MP, is deeply saddened by the passing of Tenzin Delek Rinpoche, a highly respected and much-loved Tibetan lama who died in a Chinese prison on 12 July.

Tenzin Delek Rinpoche had qualified for medical parole and required urgent heart surgery. His family had made desperate representations to the Chinese authorities for his release for over a year without response.

“Members of the Australian Parliament, in conjunction with the Australia Tibet Council, raised concerns about Tibetan political prisoner Tenzin Delek Rinpoche with our Chinese counterparts most recently in May of this year, and only last month an international petition was presented to Governments around the world requesting urgent medical parole,” said Mr Entsch.

“Tenzin Delek Rinpoche’s death could have been avoided altogether had the Chinese authorities responded to the application for release on medical grounds, and the AAPGT stands by the US State Department’s request to investigate and make public the circumstances surrounding how the monk died,” he said.

“We express our deepest condolences to the family, students and supporters of Tenzin Delek Rinpoche. The AAPGT is appalled that the Chinese government refused to return his body, so funeral rites in accordance with Tibetan tradition could be carried out. Instead, Chinese authorities cremated the body at a secret prison outside Chengdu, returning only ashes to his distraught family and community’, said Mr Danby.

“We are now hearing reports that Tenzin Delek Rinpoche's ashes were seized from the four Tibetans who were transporting them back to his hometown and that two of Tenzin Delek Rinpoche's relatives, his sister and his niece, were detained in Chengdu last Friday, and have not been seen or heard of since. This is unacceptable and, if true, we call for their immediate release”.

Mr Entsch and Mr Danby reiterated the Group’s ongoing commitment to advocating for an improvement in the human rights situation in Tibet and hopes this case will serve to better the outcomes of the remaining 2,000 Tibetan political prisoners in Chinese jails.