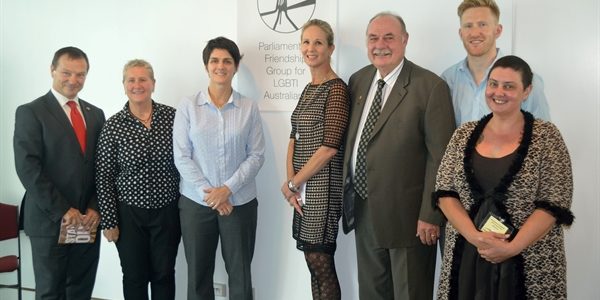 FEDERAL MPs and Senators have this week heard about the “disgraceful” level of mental illness among young LGBTI people in Australia, pledging their support to safe and inclusive school, sport, home and work environments.

The Parliamentary Friendship Group of Lesbian, Gay, Bisexual, Transgender and Intersex Australians, made up of MPs and Senators from across the political spectrum, held its fourth major event at Parliament House last Tuesday.

For the third time, the event was proudly sponsored by Telstra, with Dr Tony Warren, Group Executive of Telstra Corporate Affairs, describing the Friendship Group as a “terrific initiative”.

“It’s almost a cliché that many people see politics and politicians through a pretty conflictual lens,” Dr Warren commented. “It’s just wonderful to see you doing work on what is still a very difficult issue in many parts of the community, to drive a great outcome.”

Friendship Group Chair Warren Entsch MP said Telstra’s support and level of enthusiasm “certainly shows your commitment, as a corporate entity, to equality in these areas”.

At the event, A/Prof Jane Burns, CEO of Young and Well CRC, and Prof Kerry Robinson, University of Western Sydney, presented findings from the 2014 Growing Up Queer report.

Prof Robinson said that of the 1032 young people who completed the online survey, 41 per cent had thought about self-harming, 33 per cent had self-harmed, and 16 per cent had attempted suicide.

“The impact of homophobia and transphobia on mental health is a critical issue for Australia,” she commented.

With education being the area where the most homophobia and transphobia is experienced by young people, Prof Robinson said there was a lot of work to be done around sexuality and sex education in schools, and the different anti-discrimination regulations in public vs private schools.

“When the young people were asked one last question about what they wanted to have changed in their daily lives, overwhelmingly equal marriage was the big one. It has a lot to do with the notion that they have every right to do as much as their peers.

“They also wanted better informed teachers and doctors, and a ‘whole of community’ approach to community education – it’s not just an LGBTIQ community responsibility.”

“Often the issues that face young people are not understood by our politicians. But here we have a group of politicians who recognise that the mental health and wellbeing of our young people is critically important for the future of Australia.”

Young and Well CRC is exploring what young people are doing in the online environment, and working on how to advance activities that promote health and wellbeing.

“For the first time in history we have the capacity to use technologies to reach out, embrace, engage, and create a much better environment, notwithstanding some of the risks young people face in that online environment.”

The statistics were given a human face when Aussie Rules footballer Jason Ball spoke about his experiences in coming out, his campaign calling on the AFL to do more to tackle homophobia, and his work with the Young and Well CRC and as an Ambassador for beyondblue and the Safe Schools Coalition Australia.

Jason has come on a long journey of self-acceptance since then, and his advocacy has helped drive major initiatives in the AFL – from the screening of anti-homophobia ads on the big screen at matches, to addressing draftees at AFL induction camps, leading the Pride March in 2012 with his teammates at his side, and holding the first AFL Pride Match.

“I realised that a lot of homophobia came from a place of ignorance rather than hatred,” Jason explained, revealing that his motivation to be a role model to young players was driven by the reflection that there were no openly gay players playing football.

“I remember when I was young and struggling to come to terms with who I was. If I had known a gay footballer, it would have made a world of difference to me.”

Senator Sarah Hanson-Young, Co-Chair of the Friendship Group, congratulated Jason on his courage, saying that personal stories “get right to the heart of what we as parliamentarians and policy makers in this country need to remember”.

“Statistics can’t just sit in reports; we have to do something about dealing with them,” she said. “Whether it’s funding mental health services for young people, finding ways to encourage industry-community partnerships to stamp out homophobia, or just ensuring that as leaders in our communities, when we hear it or when we see it, we stand up and say our young people deserve better role models than this.”

Rebecca Reynolds, Chief Executive of the National LGBTI Health Alliance, also provided an update on the 2012 Diversity in Health: Improving the health and wellbeing of transgender, intersex and other sex and gender diverse Australians report.

Ms Reynolds said that while the statistics and stories are there, the challenge is how to translate that into effective policy.

“We’ve seen great areas of improvement, including the removal of gendered language from MBS item codes, publication of Australian Government guidelines on the recognition of sex and gender, a Senate Inquiry on the coerced and involuntary sterilisation of intersex people, and the updating of the Sex Discrimination Act to include protection on the basis of sexual orientation, relationship status, gender identity and intersex status.

“However the implementation in each of these areas continues to be inconsistent both in uptake and compliance…. the continued lack of understanding on the health and wellbeing implications of diverse gender and intersex characteristics is perpetuating health disparities for our communities.”

Sally Richardson, National Program Director of Safe Schools Coalition Australia, convened by the Foundation for Young Australians, ended the event by outlining their “incredibly exciting” program, which is federally funded by the Department of Education and currently rolling out nationally to be in every state and territory this year.

“We want children to be safe and we want schools to be inclusive and welcoming of all young people,” Ms Richardson said.

“The previous speakers today have shown what the outcomes are for young LGBTI students in schools who are currently without support. We really want to reshape that picture so that young people who are LGBTI have the same opportunities as every other student in Australia.”

SSCA assists schools to get a clear picture of issues that might exist at their school and enact changes to policy and practices, with the advice and support of SSCA staff, tailored professional development, and digital and printed resources. The program helps to change the culture of schools to be one that is both safe and welcoming for LGBTI students, school staff and families.

Graham Perrett MP, Co-Chair of the Friendship Group, closed the event by commending the speakers for the value of their presentations and “truly moving” personal stories.

“The statistics are horrible. That one in three LGBTI young people had thought about self-harm, and 16 per cent attempted suicide, is a disgrace for a modern nation,” he said.

“Surely we can do something, starting in the playground to get rid of that ‘tooth and claw’ element to make a more harmonious process from primary to high school and beyond. This is where we can save lives.”

For more information on the organisations mentioned, please see below: