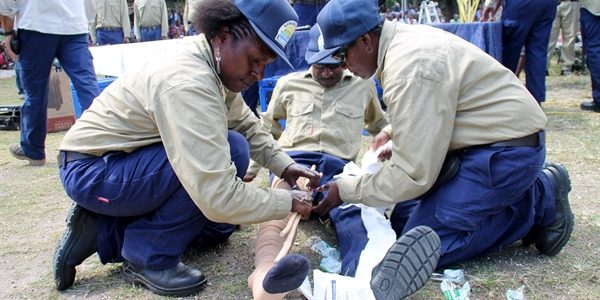 LEICHHARDT MP Warren Entsch has welcomed news that the Australian Government has increased its support for a program run by Cairns-based Reef and Rainforest Research Centre (RRRC), which is changing lives in the poverty-stricken Western Province region of Papua New Guinea.

The Building Resilience in Treaty Villages (BRTV) pilot project is an innovative community development and conservation initiative to strengthen the capacity of villages covered by the Torres Strait Treaty.

Managed by the RRRC, the project involves the recruitment and training of multi-skilled community rangers to work in construction, sanitation, first aid and leadership.

Mr Entsch, who supported the RRRC in getting the funding for both the pilot and Stage 2 phases, said he was extremely pleased that the Australian Government – and in particular the Minister for Foreign Affairs, Julie Bishop MP – recognised the value of the RRRC’s work.

“When I visited the village of Mabaduan last year with the RRRC, I saw first-hand the pride on the faces of the rangers as they graduated with a whole range of skills that will improve living conditions, health, safety and wellbeing in the villages,” he said.

“From treating snake bites and building shelters, digging wells and putting guttering on buildings, to having leadership skills and being able to stand up in front of their village and be respected for their position, the program is playing a critical role in this disadvantaged region.

“All of this is designed to establish a platform in each of these communities that will at last see delivery of appropriate health services, allowing us to meet the challenge of tuberculosis and other communicable diseases while also giving ownership of the solution to local communities.”

Following an initial $1.8 million from the Australian Government in 2014, the pilot in four Treaty Villages has been extended under a $400,000 commitment in 2016-2017. Subject to successful completion of the pilot, the Australian Government will support a phased scale up of the project over the following three years, reaching three extra Treaty Villages each year and all by 2019-2020.

The Treaty Villages, on the south coast of PNG’s Western Province, face many challenges including a lack of civic and health infrastructure, severe drought and outbreaks of diseases like leprosy and multi-drug-resistant tuberculosis.

Commencing in 2014, fifty-two community rangers (including 12 women) were trained under Stage One. These rangers have now used their skills to:

A scaled-up project would include an increased focus on food and water security, leadership and self-governance in the villages, while supporting long-term resilience and self-reliance in the Treaty Village area as a whole. For more information visit http://rrrc.org.au/programs/png/