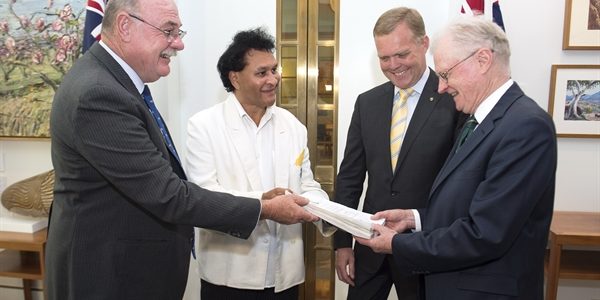 Cairns indigenous leader and renowned artist Norman Miller and his wife Barbara visited Parliament House today to present the Speaker, Tony Smith MP, with the remaining 3000+ signatures that Mr Miller has collected in support of recognition of Indigenous Australians in the Constitution. Thanks to Auspic for the images.

“Back in 2013, we stood here in Parliament House and Norman presented me with the first 2,115 signatures,” Mr Entsch said.
“Now he has collected more than 5,100 in total – a huge effort from a single person committed to a particular cause.
“It gives me a great deal of pride to stand here beside him today.
“Norman has travelled around Australia, from Cairns to Adelaide, Sydney and Perth, getting signatures at Australia Day events, Naidoc parades, football matches, even standing on street corners to communicate his message and gather support from both Indigenous and non-Indigenous Australians.
“I’d also like to acknowledge Norman’s wife Barbara, who has been with him on this journey.”
Mr Entsch said that he was a firm supporter of the ‘Recognise’ campaign but cautioned that until Indigenous Australians could come together and agree on the proposed wording, the referendum could not progress. He also added that it was better not to rush the process as that would result in a lack of engagement and ownership by Indigenous Australia.”

Warren will now start the process to have the petition tabled in the House of Representatives.

For more information on the Boomerang Petition, please visit http://barbara-miller-books.com/boomerang-petition/