NORTH QLD INDIGENOUS STUDENTS GET A KICK START FOR EDUCATION 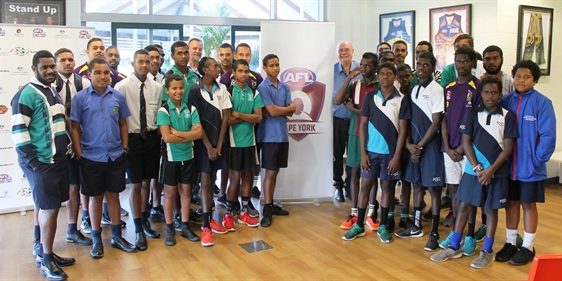 Up to 45 young Indigenous men from across Queensland's north will be supported through school and into further study or employment, thanks to a $450,000 grant from the Coalition Government to AFL Cape York House.

Minister for Indigenous Affairs and Country Liberals Senator for the Northern Territory, Nigel Scullion, who recently approved the funding, said the investment would lead to better education outcomes for First Australians in North Queensland.

“The $450,000 grant to AFL Cape York House will support up to 45 young men from remote communities in the Torres Strait, Cape and Gulf regions of Queensland to board at AFL Cape York House and ensure they receive the necessary wrap-around support services to help them complete high school and successfully transition into the next stage of their lives,” Senator Scullion said.

“This is an important part of the Coalition Government's support for young Indigenous men and women to reach their full potential and complements our strong commitment to needs-based funding for schools, which includes an estimated $248.4 million in 2016, through the Indigenous loading under recurrent funding arrangements.

“I am pleased to work with a successful organisation like AFL Cape York House to drive better education outcomes for young Indigenous men.

“AFL Cape York House had a 100 per cent retention rate for its boarders in 2015, and I look forward to seeing more outstanding results delivered from our investment in new students.”

Liberal National Party Member for Leichhardt, Warren Entsch, said the funding would drive better outcomes for Indigenous students who would not otherwise be able to attend AFL Cape York House.

“While not every student aspires to be a professional AFL player, the structures, routines and responsibilities they learn through AFL Cape York House stand them in very good stead for whatever career pathway they pursue.

“I am very pleased to have been able to secure this investment.”

AFL Cape York Programme Manager, Rick Hanlon, praised the Government for its ongoing support and the confidence it had in his organisation to deliver programmes that significantly assist the youth living at AFL Cape York House.

“Without this support we wouldn’t be seeing the educational outcomes happening at the House. Over the past three years, 12 young men have graduated with six currently attending three different universities around Australia,” Mr Hanlon said.

AFL Cape York House is based in Cairns and supports young men from remote communities who board at the facility and attend high schools around Cairns.

The $450,000 grant to AFL Cape York House has been funded out of existing funding in the Indigenous Advancement Strategy.