NBN rolls out in Manoora, Mooroobool and Kanimbla 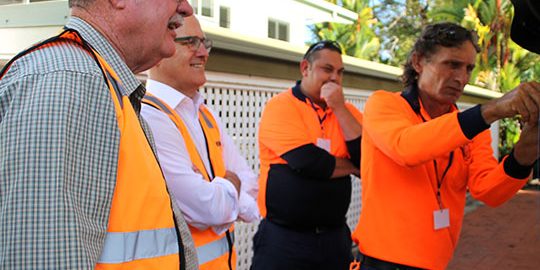 MEMBER for Leichhardt Warren Entsch MP says that around 2300 premises in Kanimbla, Mooroobool and Manoora are a step closer to getting access to the National Broadband Network, with construction on the fixed line network now underway.

Mr Entsch said: “This is an important milestone for Cairns, with greater certainty for homes and businesses as they prepare for superfast broadband.

“The message for residents in these three suburbs is clear- superfast broadband is on its way.

“Final network designs are now complete, meaning that in the coming weeks, NBN Co subcontractors will be seen in the streets, laying out fibre and building cabinets to house the electronics needed to supply the network.”

Today’s announcement is part of the Government’s ongoing reform of the NBN project, to ensure that superfast broadband can be rolled out quickly, more conveniently and with minimal inconvenience to households. Speeds on the new network will easily support high definition streaming on multiple devices at once.

Mr Entsch added: “The NBN will truly revolutionise the way people connect in their homes and businesses.

“Once construction is complete, connecting is simple. Households just need a new modem gateway to plug into the superfast speeds.”

Total connections to the NBN’s various networks, including the fixed line networks and the interim satellite service now stand at over 700,000. Earlier this year NBN Co released an updated national rollout plan indicating that by September 2018 three-quarters of all homes and businesses across Australia will be able to connect to the NBN or have connection underway in their neighbourhoods.

Communications Minister Mitch Fifield said the release of the redesigned NBN construction plan was delivering on the government’s promise to get the rollout back on track.

“When we came into Government, one of our chief priorities was to get this rollout done sooner, cheaper for taxpayers and more affordably for consumers,” Minister Fifield said.

The NBN will continue to update its online maps to inform residents when the network will be ready for service.

Households and businesses can also register their details at www.nbnco.co.au to be provided with future updates.