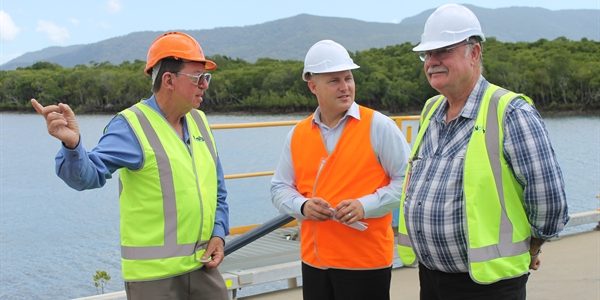 The Labor and Liberal MPs said opportunities for Queensland would always come ahead of party politics.

“Warren and I have both been pushing hard in our respective political arenas to make this happen but I think it’s high time that we join forces and take this fight to Canberra,” Mr Pitt said.

“The economic benefits that would flow to Queensland from this $2 billion 30-year contract are enormous and represent a real opportunity to further diversify the economy of North Queensland.”

Mr Entsch said he was confident that the tender submitted by The Cairns Solution would prove to be the winning bid given its obvious strengths.

“We know Cairns has a 50-50 chance of winning this now that the tenderers have been narrowed down to two groups but we won’t be taking any chances at this final stretch in the race,” Mr Entsch said.

“I have spoken with Defence Minister Senator Marise Payne’s office and said that the Queensland Treasurer and I are happy to meet her in Canberra, Sydney, wherever in order to make our pitch heard.

“This contract would generate more than 100 jobs in the Cairns region and support around 1,000 indirect jobs.”

Treasurer Pitt said Queensland was the most attractive investment option since the Palaszczuk Government’s new payroll tax rebate would make it cheaper to employ the apprentices and trainees needed in comparison to Western Australia.

“The employment and training opportunities involved with this contract, including apprenticeships for our young people, would be a real shot in the arm for the far north and Queensland offers efficiencies in this space that WA can’t,” Mr Pitt said.

“I met with the Cairns consortium just last month and the Premier has spoken in State Parliament about the importance of securing this contract ? not just for Cairns and north Queensland but for our State as a whole.”

“I want to make it clear to the Australian Defence Minister that all of Queensland is getting behind this bid.”

Mr Entsch said the Prime Minister had received correspondence from the Queensland Government conveying its unqualified support for the tender submitted by The Cairns Solution.

“Prime Minister Turnbull knows that The Cairns Solution is well equipped with all the necessary skills and experience to successfully deliver this project,” Mr Entsch said.

“In conversation with him I have emphasised that a ship building program of this scale would diversify the North Queensland economy, while building the local skills base ? a critical component for the ongoing success in developing Northern Australia and delivering on our pioneering White Paper.

“The Cairns consortium is a perfect fit for the Pacific patrol boat replacement project and Cairns is the logical place for the construction and maintenance of the vessels designed to patrol the waters off northern Australia.”

Treasurer Curtis Pitt said while he had already written to Defence Minister Senator Marise Payne, he wanted to follow-up with a meeting to highlight the advantages to the Commonwealth of awarding the patrol boats contract to Queensland.

“This is an exciting project that will be best serviced in Queensland given our proximity to the Pacific,” Mr Pitt said.

“We have the local expertise, a proven track record and the contract would be a major boost to economic activity that fits firmly with the federal government’s agenda and its Northern Australia White Paper.

“Warren is a powerful voice in Canberra and given his extensive work on the Northern Australia White Paper, I know he wants to see this happen as much as I do.”

The boat building component of the contract is worth $594 million, while ongoing maintenance and personnel costs over the life of the contract are estimated at $1.38 billion.