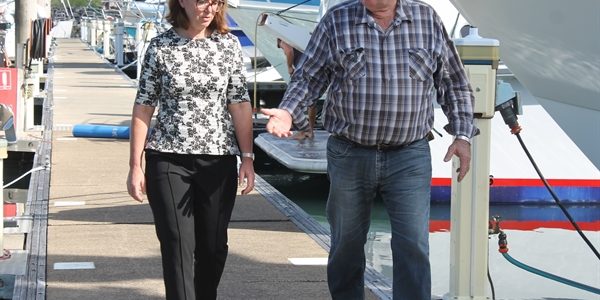 A VOTE for Labor, the Greens, independents or minor parties this election is a vote to introduce extensive fishing closures off the North Queensland coast, Member for Leichhardt Warren Entsch said today.

Mr Entsch visited Yorkeys Knob Boat Club with Anne Ruston, Assistant Minister for Agriculture and Water Resources with responsibility for Fisheries, to discuss the threat to local livelihoods as a result of Labor’s plan to shut the Coral Sea.

“The Labor party has recently vowed to bring back its 2013 marine park plan for the Coral Sea which would close huge areas to recreational, commercial and sports fishing,” Mr Entsch said.

“Several important reefs for long-range fishermen in particular would be lost to anglers, and a reduction in the areas accessible by sports fishing operators would mean a hit to tourism.

“When we talk about management of marine reserves, having a lock-out policy is not ‘management’. There is absolutely no reason why we can’t have the best-managed marine reserves in the world with fishing and other activities within that reserve allowed, provided they meet all of the criteria in relation to sustainability.”

Senator Ruston supported Mr Entsch’s comments, saying that when the Coalition inherited government in 2013 there was “a blanket lockout of the Coral Sea” which was going to have a devastating impact both on the recreational sector, the tourism sector and the commercial sector.

“We said we’d consult, and that’s exactly what we’ve done,” she said. “I was up here earlier this year and speaking to the recreational and the commercial sectors, who had some issues around what was being put forward.

“It was quite clear that they didn’t support what was being proposed by Labor, driven by the Greens, and so we said that anything we did in the future would be based on sound science and recognise all stakeholders in our marine areas.

“Should we be fortunate enough to be re-elected, we’ll produce our draft proposals for further comment. The one thing I can assure you is that the Coalition is not going to put in any zoning regulations in any of our marine reserves around Australia unless we believe that they are to the benefit of every stakeholder, not just for one sector at the expense of others.”

Mr Entsch warned constituents that only a vote for the LNP would ensure long-term sustainable access to the Coral Sea for local small businesses and families that rely on this resource.

“A vote for Labor, Green, minor party or independent candidates will only have one possible outcome – a Labor government who will not hesitate to reintroduce their lock-out laws for the Coral Sea.”