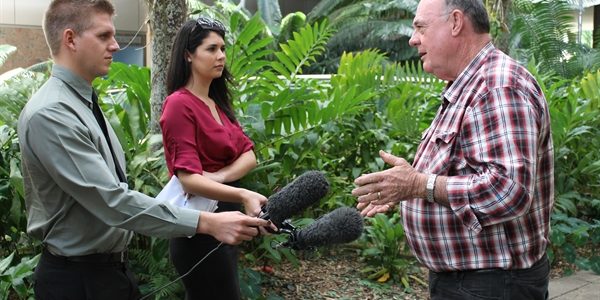 FAR Northerners have the opportunity to help fill in a “blank canvas” when it comes to putting forward ideas to make Northern Australia prosperous, says Leichhardt MP Warren Entsch.

Mr Entsch, along with Queensland Senator Ian Macdonald, today presented the Coalition’s 2030 Plan for Northern Australia to a discussion group in Cairns, seeking ideas and suggestions that will help shape Northern Australia over the next 15 to 20 years.

Mr Entsch confirmed that if the Coalition is successful at the upcoming election, within 12 months it will issue a White Paper that will be a “road map” for the region’s future.

“We won’t be making any promises of funding at this stage as Australia has debt of $300 billion dollars,” Sen. Macdonald told the group of around 50 tourism, business and industry representatives.  “If we said to people here today that we were going to do all these things in 12 months, or even 24 months, people would be rightly cynical.

“We have this debt to pay off and that will be our first priority. But what we want to do is set out the road map of how we will get to our 2030 vision. This will detail what’s going to be done, when it’s doing to be done and how it’s going to be paid for.”

Sen. Macdonald highlighted as priorities a Cooperative Research Centre for Northern Australia, investing how to double the region’s food production to take advantage of the booming economies of India and China, as well as building upon the “sophisticated urban cities” already in the north with centres of excellence in health and education offering expertise to other tropical nations.

“In addition, land tenure is absolutely critical if we’re going to move forward on this,” added Mr Entsch.  “If you haven’t got security of tenure you’re not going to be able to encourage anybody to invest.

“There’s also the barrier of green and red tape ? I’ve seen great projects that should have been started, but when it takes six or seven years to get nowhere they go somewhere else. These are lost opportunities.

“Infrastructure is also vital when talking about increasing agricultural capacity ? we need water storage, efficient transport and reliable roads.  We have to start talking about projects such as the Mt Emerald wind farm project, so that we have consistent and affordable power.

“But the one thing we do have is a huge amount of enthusiasm ? it’s amazing the support that is coming from the community since this announcement has been made.”