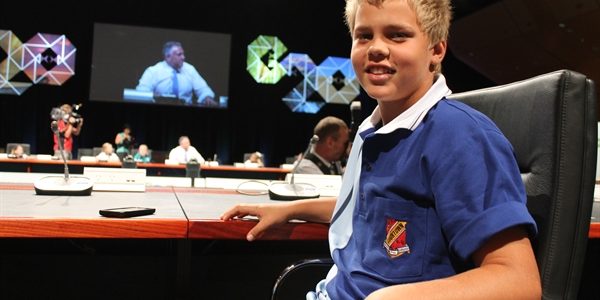 COOKTOWN State School student Dylan Mitchell has been recognised on the world stage with his artwork being viewed and enjoyed by international figures at the G20 finance ministers’ meeting in Cairns this weekend (19-21 SEP).

Dylan was among just 14 students from across Far North Queensland awarded for their entries in the G20 Cairns School Art Competition. They were presented with their award by Treasurer Joe Hockey and Federal Minister for Leichhardt, Warren Entsch at a ceremony today in Cairns.

Mr Entsch said: “Dylan’s artwork, as well as the artworks of dozens of other students from across the region, is now on display as part of a huge 70 metre mural erected at the Cairns Convention Centre.

“Their artwork also features on the back of the VIPS’ and delegates’ lanyards ? bringing a bright and colourful feel to the whole G20 event.”

At the ceremony, Dylan and the other winners were also given exclusive access to the G20 meeting room to sit around the table in the Finance Ministers’ and Central Bank Governors’ chairs before the summit begins tomorrow.

Mr Entsch said: “It was completely against security protocol to let anyone into the summit venue before the event, but I saw this as an unmissable opportunity for our students here in the Far North to get a glimpse of how politics and economics work at a global level.

“Fortunately, the G20 security staff were fantastic about it and all the kids involved got such a buzz ? it was great to see.”

Dylan received a certificate and an iPad for his school.