Fundraising for the Bush through the gift of laughter 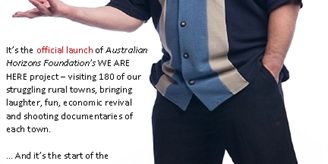 LEICHHARDT MP Warren Entsch is urging locals to support ‘battlers in the bush’ by attending an evening of laughs and entertainment organised by the Australian Horizons Foundation.

The Foundation, of which Mr Entsch is patron, has been a vocal supporter of regional Queensland where drought-stricken communities and families have been doing it tough for many years.

Event organisers for the Foundation have been busily preparing for a fundraising comedy special in Cairns this Friday night, 20th January, featuring Dave Ivkovic – one of Australia’s leading stand-up comedians.

While the event is set to entertain attendees and raise much-needed funds, there will also be key announcements from the Foundation about their plans to support struggling rural communities.

Australian Horizon Foundation’s CEO Neill Newton, stated: “The charity was formerly known as Gulf Horizons Foundation, yet the charity is expanding to embrace many more struggling rural communities in need.

“The name change reflects this mission, to reach many more people throughout Australia, and with its new branding titled ‘The Great Australian Revival’ we are launching a series of projects to bring relief and economic turnaround.”

The comedy event will launch the VAST (Visit Australia's Small Towns) program, its goal to take a comedy troupe and documentary crews to 180 rural towns over the next 24 months, bringing light relief whilst shooting video documentaries for each town that will help with much-needed economic revival.

Mr Entsch has welcomed the fundraising efforts, saying that environmental and economic factors had long been the plight of the brave men and women of regional Queensland.

Although attention from media and community organisations had sparked some public support, there were still far too many Australians doing it tough in the bush, he said.

“The Australian Horizons Foundation continues to support rural communities long after the media coverage has subsided and general public enthusiasm has moved on,” Mr Entsch explained.

“This continued drive to achieve meaningful change is testament to the strong leadership and efforts of the determined individuals behind the Foundation.”

The Cairns RSL will play host to Friday’s evening of laughs and the community is encouraged to attend and support this very worthy cause.