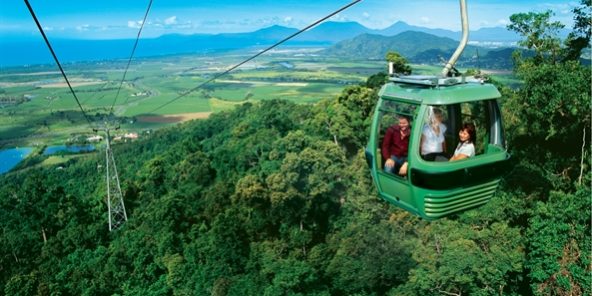 FEDERAL Member for Leichhardt Warren Entsch has promoted the 20th anniversary of Cairns’ Skyrail Rainforest Cableway to his colleagues in the Australian parliament.

Mr Entsch said Skyrail was one of a handful of Australian tourism experiences “which should be on everybody’s bucket list.”

“Skyrail is truly an iconic cable car experience that transports passengers on a 7.5 kilometre journey that starts from the bottom of the Cairns Range but then flies above the rainforest canopy to the village of Kuranda.

“Over the last two decades, it has hosted more than 11 million visitors – equivalent to half the population of Australia.”

Mr Entsch said the highest credit goes to George Chapman AO, his wife Margo, their daughters Karen and Helen, their son Dr Ken Chapman and his wife Karen – the family who developed Skyrail into the world-class business it is today.

“Under their leadership, Skyrail has consistently punched above its weight and received awards at local, national and international level.

“The Skyrail team is an undisputed success story for Cairns and the wider Far North Queensland region. I wish them many more successes in the years to come,” Mr Entsch told Parliament.