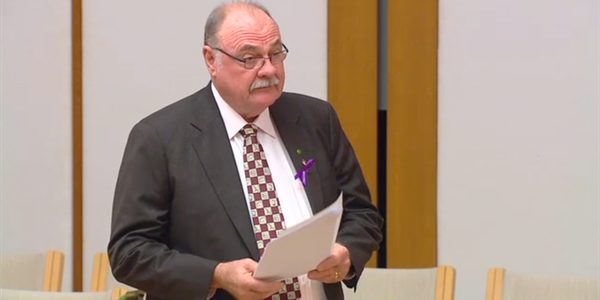 Mr Entsch is Co-chair of the bipartisan Australian All-Party Parliamentary Group for Tibet (AAPGT), which aims to amplify Tibet’s voice in parliament. He says the AAPGT had this week heard from three Tibetan delegates whose lives had been directly impacted by China’s harsh policies in Tibet.

“The delegates’ message to parliamentarians was to call upon the Chinese Government to release two political prisoners in particular – Mr Tenzin Delek Rinpoche and Mr Runggye Adak,” said Mr Entch.

He said that on 1 August 2007, Runggye Adak, a nomad from eastern Tibet, stepped onstage at an official function and publicly called for the return of the Dalai Lama to Tibet.

“For this simple, brave, passionate act he was arrested and sentenced to eight years in prison by the Chinese authorities, who charged him with ‘provocation to subvert state power,” he said.

“The second case is that of Tenzin Delek Rinpoche, who was arrested in 2002 on charges of ‘crimes of terror and incitement of separatism’. He received a death sentence with a two-year reprieve which was later commuted to life imprisonment and then reduced to a term of 20 years.

“The AAPGT is discussing how it can support the Australian Tibet Council in both of these cases,” said Mr Entsch.

The Tibetan delegates also raised concerns that the Asian Infrastructure Investment Bank is planning to build 20 dams across Tibet.

Mr Entsch said: “Tibet is the source of five major rivers that feed into India, China, Bangladesh and Pakistan. If this water gets affected upstream, it could cause devastation in neighbouring countries downstream, given these countries all have agri-based economies.

“Tibetans are not against development, but they want to make sure that development is inclusive of human rights, and you certainly cannot argue about that.

“Our group (AAPGT) had actually requested a visit to Tibet to see the conditions firsthand, following discussions I initiated with the visiting Chinese ambassador in early 2014. We are still waiting on that to be confirmed,” said Mr Entsch.

He said: “China must understand that if it has nothing to hide in Tibet then there is no reason why unsupervised visits to the Tibetan region should not be allowed.”