Defence jobs for Cairns the focus of Austal industry engagement 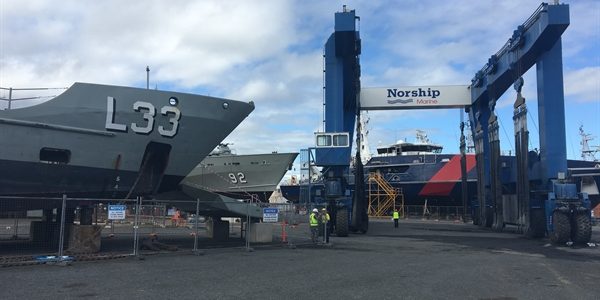 Growing defence industry Jobs in Cairns through the Turnbull Government's commitment to sustain up to 21 new Pacific Patrol Boats in the city will be the focus of engagement workshops to be held by shipbuilder Austal on Thursday.

Ahead of the visit, Minister for Defence Industry, the Hon Christopher Pyne MP welcomed Austal's strong engagement with local industry in Cairns.

Minister Pyne said Austal will meet with a wide range of industry representatives to support the new Pacific Patrol Boats, the existing Pacific and Cape-class patrol boats and other opportunities in the expanding naval ship industry.

“Austal was awarded a $24 million contract to provide support services for the existing Pacific-class and new Pacific Patrol Boats for an initial seven years by the Turnbull Government, with support services contracted to start early 2018.

“I congratulate Austal on its initiative to engage with the naval industry in Cairns on this important project that will employ 13 people to support vessels locally as well as in Henderson, Western Australia.”

In addition to the Pacific Patrol Boat contract, Thales Australia has been awarded the new Armidale Class Patrol Boat In Service Support contract. The contract has a potential value of more than $55 million per annum and will commence on 1 July 2017, with existing sustainment activities to be maintained.

Federal Member for Leichhardt Warren Entsch welcomed the announcements, saying he anticipated substantial indirect employment would be generated through delivery of the contracts.

“It’s very exciting news that not only do we have the commitment for the long-term servicing of the Pacific Patrol Boats in Cairns but also the ongoing sustainment of the Armidales, now that the contract has been awarded to Thales Australia,” he said.

“This is a reflection of the outstanding ability and capacity of our industry and the skill-sets of our trades to be able to deliver on these contracts.

“This is great news for Cairns, and again confirms that we are absolutely committed to the city becoming a Northern Australian maritime maintenance hub.

“I’m looking forward to Austal’s visit to Cairns tomorrow where there’ll be a chance for local contractors to engage directly with Austal representatives so we can make the most of the opportunities for our region.”

Construction of the first Pacific Patrol Boat at Austal's Henderson facility is scheduled to commence in April 2017 with delivery of the first vessel due in late 2018.

All of this is in addition to the $24 million election commitment to improve Cairns Marine precinct infrastructure, which is being delivered this year.