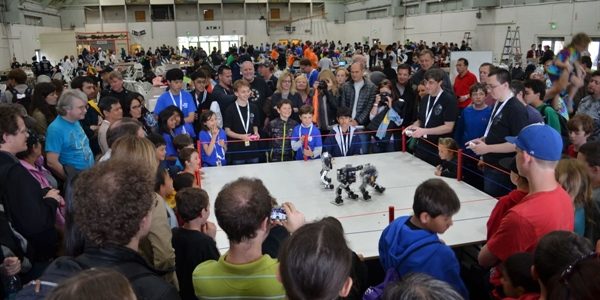 EIGHT clever kids from Cooktown State School Robotics Club are aiming to compete in next year’s Robogames in the United States ? and they’re calling on the local community to help them get there.

Federal Member for Leichhardt Warren Entsch praised the dedication of the six boys and two girls, and their IT teacher Herman Rijken, who meet five days a week to design, develop and test robots.

“This is exactly the type of innovation the Coalition Government is working to develop through our National Innovation and Science Agenda as we transition our economy from the mining construction boom to an economy of innovation,” said Mr Entsch.

“It’s critical that young people in regional areas, such as here in Cooktown, grab these opportunities to learn about engineering, robotics and programming, which will become key skills in the future.

“I’m delighted to see Herman and his students at the Cooktown Robotics Club dismissing the perception that learning about robotics is limited to larger cities ? they are an inspiration for all of regional Australia.”

Mr Entsch said the students are currently building robotic creations for competitions in the local region, but they’re aiming to raise $42,000 in the coming months to compete in the 2017 Robogames.

Herman Rijken from Cooktown State School said the group of motivated teens was already making an impact in their local community.

“The aim of our group is also to foster greater learning opportunities for other young people in remote Far North Queensland,” he said.

“Our Robotics Club has volunteered many hours at Regional Robotics Camps ? organized by the Cairns School of Distance Education ? to give students all across the region an opportunity that they wouldn’t otherwise have.

“In the past 12 months, members of the Club have won regional robotics competitions in Far North Queensland and were nominated for this year’s Cooktown Australia Day Arts and Cultural Award. That alone speaks volumes about the community’s support of their achievements.”

Student Brandon Buhman said: “We are a successful group of young people who are looking towards greater challenges overseas.”

Student Hudson Dagge added: “Our aim is to continue to spread our robotics knowledge to other communities in our region.”