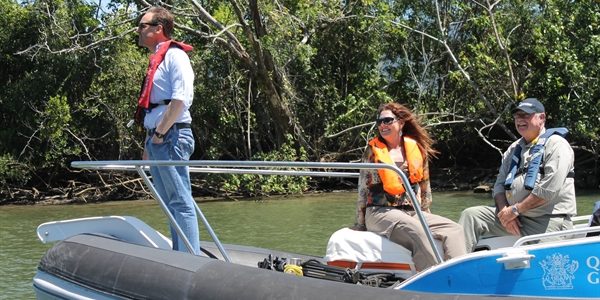 A re-elected Turnbull Government will deliver a $1 billion boost to protect the Great Barrier Reef by tackling the two biggest challenges – climate change and water quality.

A new $1 billion Reef Fund announced today is part of the Coalition’s comprehensive Plan to Protect the Great Barrier Reef, which builds on $461 million in Reef funding already committed since the Coalition came into office.

“The new $1 billion Reef Fund builds on the projected investment of more than $2 billion from Australian governments to protect the Great Barrier Reef over the next decade.

“The Reef Fund will provide up to $1 billion over 10 years in investment finance for projects in the Reef catchment region that deliver clean energy, reduce emissions and improve water quality.”

The $1 billion Reef Fund builds on the Coalition’s 2013 election commitment to create an innovative Reef Trust to improve water quality and fight crown of thorns starfish.

• $40 million to tackle water quality under the Phase Four of the Reef Trust through nitrogen and fertiliser trials and tackling gully erosion.

• $6 million to acquire a new Southern Reef ranger to tackle crown of thorns starfish and police illegal fishing on the Reef.

• $300,000 for compliance vessels to support the Yarrabah community as they implement their Traditional Use Marine Resource Agreement.

“This latest $40 million investment in water quality under the Reef Trust will work with farmers and landholders to trial efficient nitrogen and fertiliser practices, as well as target nutrient and sediment run-off from gully and stream bank erosion,” Mr Entsch said.

Investments under the Reef Trust are overseen by the Independent Expert Panel, chaired by the former Commonwealth Chief Scientist, Professor Ian Chubb.

“This is fantastic news for these local initiatives,” Mr Entsch said.

“Heidi Taylor and her team of volunteers at Tangaroa Blue do critical work surveying and cleaning up marine debris around the Far Northern coastlines, and I’ve been working closely with Anthony Satrick and the Yarrabah Gunggandji Rangers on ways to strengthen their activities so I’m very pleased they’ll be receiving these extra vessels.

“This investment will also build on the extensive work that’s being done by local farmers and landholders addressing erosion and fertiliser use, as well as allowing us to continue tackling crown of thorns starfish outbreaks.”

The Turnbull Government’s comprehensive Plan to Protect the Great Barrier Reef stands in stark contrast to Labor’s record of mismanagement.

The Coalition took unprecedented action to end all five dredge disposal plans and put in place a ban under law on future capital dredge disposal projects in the Great Barrier Reef Marine Park.

As a result the World Heritage Committee removed Australia from the ‘in-danger’ watch list and praised Australia as a global leader in reef management.

Australians are passionate about the Great Barrier Reef and the Turnbull Government is committed to protecting it for future generations.