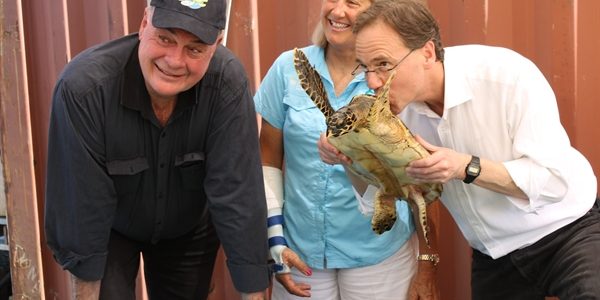 THE dugongs and turtles along the Great Barrier Reef will have greater protection under a $5 million plan announced today by the Coalition.

Shadow Minister for Climate Action, Environment and Heritage, Greg Hunt, made the announcement with the Member for Leichhardt, Warren Entsch, in Cairns following ongoing community concern about illegal poaching and the need for greater care for the dugong and turtle population.

If elected, the Coalition will move quickly and constructively to implement a Dugong and Turtle Protection Plan.

The Plan will work to protect the majestic dugong and turtle populations of Far North Queensland and the Torres Strait Islands from the threats of poaching, illegal hunting and marine debris.

As part of this important environmental and marine conservation task, the Coalition will maintain existing funding and will additionally provide a total of $5 million for dugong and turtle protection, comprising:

·         $2 million for specialised Indigenous Ranger Programs for marine conservation along the Far North Queensland Coast and for strengthened enforcement and compliance.  This will be done through supporting additional officers on the water and on land to crack down on dugong and turtle poaching and the illegal trade in dugong and turtle meat.  We will work with the Queensland Government on the potential for extending the authority of select Indigenous Rangers to take action to stop illegal poaching.

·         $2 million for an Australian Crime Commission investigation into the practice of illegal killing, poaching and transportation of turtle and dugong meat.

·         $700,000 towards cleaning up marine debris along the Far North Queensland Coast, the Torres Strait Islands and in the Coral Sea.  Marine debris – especially ‘ghost nets’ – provide significant risks to dugongs and turtles and we will take steps to clean up these threats.  We will consult, support and work with Indigenous communities in dealing with these threats.

·         $300,000 to support the Cairns and Fitzroy Island Turtle Rehabilitation Centres. The Coalition will allocate $100,000 per year to the Fitzroy Island Turtle Hospital, run by the Cairns Turtle Rehabilitation Centre, for 3 years to help with capital works and to help the hospital achieve a permanent and sustainable future.

Within six months we will also:

“The Coalition respects the traditional rights of the Indigenous community.  However we will not tolerate illegal poaching of dugongs and turtles under the cover of so-called traditional hunting.  We also do not support the taking of turtles and dugongs in green zones,” Mr Hunt said.

“These actions are not supported by the Indigenous elders and we will work with them to stop this illegal practice which is impacting on dugong and turtle numbers and harming the local tourism operations.  We welcomed the recent action by the Queensland Government in passing legislation to outlaw cruelty to dugongs and turtles.

“I am also pleased to honour a commitment to the Cairns and Fitzroy Island Turtle Rehabilitation Centre, which I made when I visited their centre last year with Warren.  They do tremendous work with a strong team of volunteers.”

“The illegal slaughter of dugongs and turtles has been a significant concern in our community,” said Mr Entsch.  “Not just from the impact of the numbers of dugongs and turtles, but also the negative impression it gives to tourists who have been horrified to witness turtles being killed as they are supposed to be enjoying the beauty of the Great Barrier Reef.

“I also know that the funding for the Cairns and Fitzroy Island Turtle Rehabilitation Centres will be well used in rehabilitating turtles and returning them to the sea.  The cleaning up of debris will assist in minimising those which are found hurt and require care.”

The Dugong and Turtle Protection Plan will form part of the Coalition’s Reef 2050 Plan to ensure we have long term and sustainable management of the Great Barrier Reef.