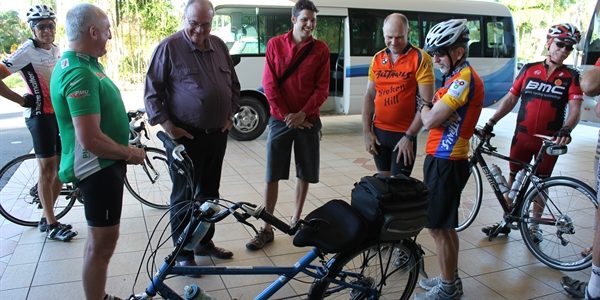 ROAD safety in Far North Queensland has received a boost with a new round of funding announced under the Black Spot Programme to target known danger spots for cyclists.

Minister for Infrastructure and Transport Darren Chester and Federal Member for Leichhardt Warren Entsch today announced $450,000 to fix black spots on roads in the Cairns region.

Mr Chester said the projects were recommended by a panel of independent road safety experts and would be delivered during the course of 2016-17.

“The annual economic cost of road crashes is estimated at $27 billion per year. Governments of all levels have made significant progress over several decades in reducing fatalities, yet there is still work to be done,” Mr Chester said.

“This investment is helping to make our local roads safer for motorists, cyclists and pedestrians.”

Mr Entsch said Cairns Regional Council, as the proponent of the Cairns Bicycle Network, had identified the black spots through a recent road safety audit.

“Council has used the results of the audit to prioritise a list of road sections that should be considered for upgrades, from widening the sealed pavement or adding Bicycle Awareness Zones, based on the risk of bicycle/vehicle conflict,” he said.

“The improvements will take place on a number of local streets, with the exact locations yet to be determined by Council.

“However I’m sure that residents will recognise the history and notoriety of each of these black spots, whether it’s a result of their own near-misses or from seeing emergency services at the site first-hand.”

The Australian Government has committed $500 million to the Black Spot Programme from 2014 15 to 2018-19, including an additional $200 million over two years from 2015-16 to improve road safety and infrastructure across the country.

“The Black Spot Programme allows anyone to make a submission for a safety upgrade to a road or intersection in their local area,” Mr Entsch said.

According to the Bureau of Infrastructure, Transport and Regional Economics, there were 1,242 road deaths in Australia in the 12 months to February 2016.

“This is far too many and we must continue the campaign to make our roads safer,” Mr Entsch said. “Accidents take a huge toll on families, our communities and the economy so I’m very pleased to see these upgrades approved.”

For more information on the Australian Government’s Black Spot Programme, or to nominate a black spot, visit http://investment.infrastructure.gov.au/funding/blackspots/.