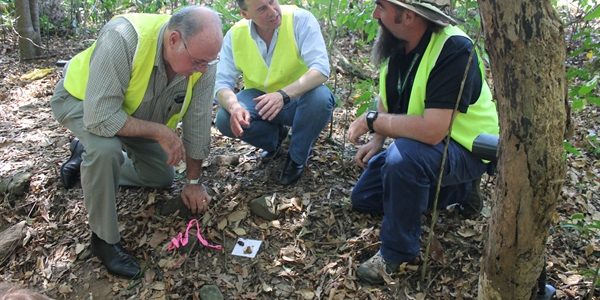 POLITICAL differences need to be put aside in recognition of the fact that support for the Wet Tropics Management Authority’s Yellow Crazy Ant eradication plan must come from all levels of government, says Leichhardt MP Warren Entsch.

“It’s good to see Senators Lazarus and McLucas speaking out on Yellow Crazy Ants this week, we need pressure from all fronts to ensure WTMA gets the funding it needs to continue its vital work,” Mr Entsch said today.

“At the federal level, I’ve been working closely with Environment Minister Greg Hunt, who recognises the threat that these ants pose to agriculture, native species and the unique Wet Tropics ecosystem. He’s working to identify possible sources of support, together with Agriculture Minister Barnaby Joyce who has responsibility for biosecurity measures.

“Senator Lazarus is welcome to get in touch with Minister Hunt to argue for funding, but the focus really needs to be on the Queensland Government at this point in time.

“Senator McLucas would be well-placed to lobby her state Labor colleagues, and I know that Queensland Treasurer Curtis Pitt has been working behind the scenes. Cairns Mayor Bob Manning has also identified a range of in-kind contributions from council which is very helpful.”

“Already, we are spending close to $4 million on baiting and controlling these pests, including through funding for six Green Army teams, a grant made by Terrain Natural Resource Management to Kuranda Envirocare and a $1.9 million grant to WTMA that winds up in June 2016,” Mr Entsch told his colleagues.

“Now we need the State Government to come on board.

“Biosecurity Queensland has done great work with electric ants, which have been already been eradicated. They can transfer that Cairns-based team to yellow crazy ants. They have the expertise and all the set-up, so we can easily transition to – and eradicate – yellow crazy ants.

“Also, $3 million of federal money has been recently allocated to Queensland through the White Paper on Agricultural Competitiveness for on-ground biosecurity activities.

“Queensland needs to allocate this to the eradication of this horrible pest adjacent to the Wet Tropics and make a matching contribution. It would be a good start towards WTMA achieving what it needs for eradication.”

Mr Entsch again acknowledged the efforts of Scott Buchanan, the Chief Executive of WTMA, together with Lucy Karger of the yellow crazy ant eradication team and Frank Teodo – a local landowner and tireless advocate on this issue.

“Frank was in touch with my office just this week and said how effective the latest baiting program had been ? in some areas they were monitoring, they could barely find an ant,” he said.

“That’s exactly the result we’re after in all the infestation areas around the Wet Tropics, so we can’t let all this work to go to waste and allow this pest to reestablish itself.”