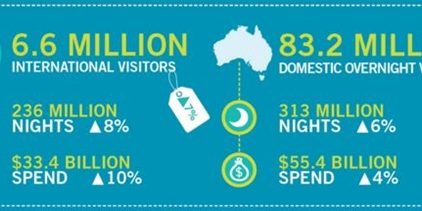 NEW figures released by Tourism Research Australia show that Tropical North Queensland was the seventh-highest region in the country for tourist spending.

In 2015, Australia’s tourism industry grew to a record $94.5-billion on the back of strong growth in both international and domestic visitor numbers, who are staying longer and spending more.

Across Queensland, international visitors were up nine per cent to over 2.3-million and spend was up 19 per cent to almost $5-billion.

Domestic overnight trips increased 8 per cent to almost 20.1 million, while spending by domestic visitors was up six per cent to $14.5-billion.

“We have more than 3,600 tourism businesses across Tropical North Queensland, benefiting from the nearly 5.3-million domestic and international visitors came to our region last year,” said Mr Entsch.

“The research shows tourists stayed an average of six nights and splashed out nearly $3.1-billion – making our region the seventh-highest in Australia for tourism spending.”

The regions who received more tourism spending than Tropical North Queensland were Sydney ($15.2-billion), Melbourne ($13.8-billion), Brisbane ($6.4-billion), Perth ($6-billion), Gold Coast ($4.5-billion) and the North Coast of NSW ($3.3-billion). However, Mr Entsch said he was quietly pleased that Tropical North Queensland received more of the tourist dollar than larger centres such as Adelaide ($3-billion) and the Sunshine Coast ($2.5-billion).

“Tourism dollars spent at local businesses has flow-on effects in local communities – particularly in regional areas where 44 cents in every tourism dollar is now spent.”

Mr Entsch said that the Australian Government is encouraging more investment and visitation in regional areas through its Tourism 2020 Strategy.

An interactive tool showing tourism activity by regional area is available on the TRA website.