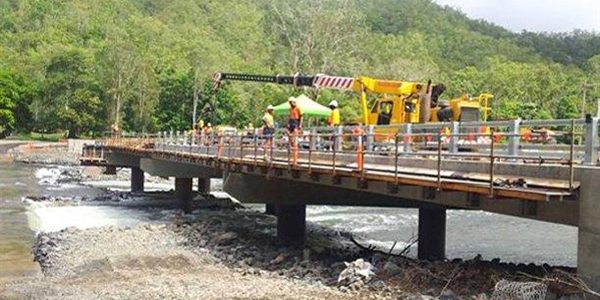 CONSTRUCTION of the new Bloomfield River Bridge is now complete, ending years of wet season isolation for the remote community of Wujal Wujal on the Cape York Peninsula.

Deputy Prime Minister and Minister for Infrastructure and Regional Development Warren Truss said the bridge will improve access for the local community to schools and health services during the wet season.

“The Australian and Queensland Governments each provided $10.5 million towards the overall package.”

“The project team overcame some significant challenges, including torrential rainfall and flooding, to complete the project,” Mr Entsch said.

“This was a unique project as full-time ‘croc-spotters’ also had to keep a lookout for any curious crocodiles venturing too close to the project site.”

“This is a great example of how the state and federal Governments are working together to deliver better infrastructure and planning as part of our strong plan for a brighter future,” Mr Kempton said.

“We have heard stories about emergency service volunteers and local residents risking their lives to rescue motorists who become stranded while attempting to cross the flooded causeway.

“The new bridge is now more than 3.5 metres higher than the causeway, which means flooding will be far less frequent, as will the need for dangerous fast-water rescues.”

Mr Kempton said the bridge opening was also great news for visitors to the region.

“Cape York is a world class fishing destination so this is great news for tourists wanting to access this remote part of the world,” he said.

The bridge upgrade was jointly funded by the Australian and Queensland Governments. It was delivered by TCS Civil and Building, in partnership with Wujal Wujal Aboriginal Shire Council.

Note to Editors: The Wujal Wujal Council has endorsed naming the Bloomfield River Bridge after two respected elders, brother Bobby and Jacky Ball.  The land where the bridge is constructed and south to Degarra is their traditional country.  They are the eldest remaining sons of their family.  During the construction of the bridge, they would visit the site daily.  They walk from the Wujal Wujal Shire to Degarra each day to visit a river fishing spot.