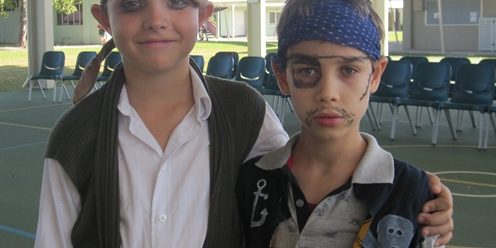 FEDERAL Member for Leichhardt Warren Entsch will put himself ‘under the hammer’ later this month at a fundraising auction for local youngster Flynn Rigby.

Flynn will head to China in the near future for a second round of life-changing stem cell treatment and a fundraising drive is in full force. The treatment will cost $30,000 and the donations are currently sitting at around $12,000.

Mr Entsch highlighted Flynn’s story in Parliament today, saying that although he can’t attend the event, he wanted to show his support for Flynn and his wonderful family.

“At just 11 years of age, Flynn has had a challenging life,” he explained. “Flynn was born a surviving twin at just 24 weeks in November 2002. As he developed, he was unable to speak and was diagnosed with autism.”

Mr Entsch became involved in Flynn’s cause in 2011 when his mum and dad, Jenni and Frazer, started fundraising to take Flynn to China for stem cell treatment which was not available in Australia. The community rallied strongly, helping to raise more than $40,000.

“The results were absolutely remarkable,” Mr Entsch told Parliament. “A year later Flynn was speaking in sentences, chatting away with people, drawing, writing, reading and telling the time.”

A major fundraising event, an auction night at Yorkeys Knob Boating Club, is coming up on Saturday, 31 May, and many businesses in Cairns have thrown their support behind the night.

“With a bit of creativity I’ve decided to put myself under the hammer,” Mr Entsch said.

The package, for two people, will see Mr Entsch and his wife Yolonde pick up the winning bidders in a stretch limousine, thanks to the wonderful services of Coral Sneddon and Sue Bartlett from Cairns Limousine Services.

“We’ll enjoy a bottle of champagne on the way to Palm Cove, where we’ll have a delicious meal at the highly-awarded Beach Almond restaurant, owned by Brian and Sarah Holding, before dropping them home in the limo,” Mr Entsch said.

“I urge anybody who wants this unique opportunity to take advantage of it; we will certainly have a wonderful night and Yolonde and I are hoping to raise a very significant chunk of cash for Flynn’s cause.”

Mr Entsch said that as Flynn moves into his teenage years, it is “absolutely critical” that he is given the best possible opportunity to reach his potential.

“I have no doubt at all that raising this money, hitting that $30,000 target, will give Flynn the best chance he has in his life.

“It is a fabulous cause and I know that it is going to make a huge difference for young Flynn.”

Auction Night tickets are $35 per person and can be purchased from a variety of outlets around Cairns, including Geckos Indoor Play Centre, Smithfield Shopping Centre, or Lenard’s Chicken in Cairns Central. Alternatively, phone Jenni Rigby on 0419 577 681 or via Team Flynn support page on Facebook for details.

Anyone who would like to lodge an early bid for the dinner package with Mr Entsch can contact Heather Beck on heather.beck@aph.gov.au with their name, contact details and bid.