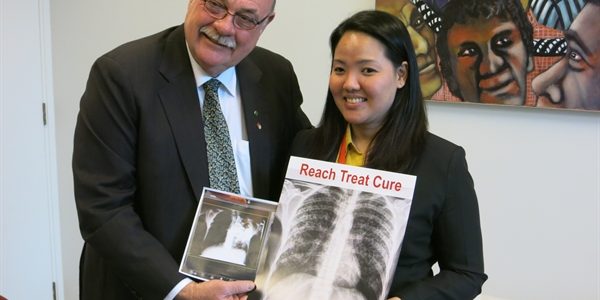 LEICHHARDT MP Warren Entsch has congratulated Cairns State High School for its measured handling of the TB case within the school community over the last fortnight.

It comes as World TB Day events this week have highlighted the need for an urgent global focus on the disease in developing countries, which affects 9 million people a year and kills 1.5 million.

Mr Entsch said he has been monitoring the situation at the High School and commended Principal Angela Toppin and staff who have done “a very good job”.

“All the experts who have been working with them have acknowledged that,” Mr Entsch said. “It’s important not to create panic in the community – TB is a serious disease, but when diagnosed in Australia it’s very treatable. It’s only when it gets to the drug resistant form that it becomes more difficult.”

This week, Mr Entsch has hosted and attended events in Parliament House for World TB Day, which aims to build public awareness that tuberculosis remains an epidemic in much of the world.

“Our neighbour PNG, which lies within just four kilometres of the Australian islands of Saibai and Boigu, has the highest burden of TB in the Pacific region.
“While it is difficult to estimate the rates of drug-resistant tuberculosis, it is considered to be endemic in PNG. Of approximately 23,000 cases reported in 2013, sadly, 28 per cent are people under the age of 15.”

On Monday, Mr Entsch hosted a presentation with TB advocacy groups Results International and Policy Cures, who brought a young Filipino woman to Australia to tell her story of surviving TB.

Louie Zepeda was 25 years old and working as an architect in Manila when she contracted multidrug-resistant tuberculosis meningitis, which enters the brain.

“Louie told us of her 24-month, gruelling treatment, where she swallowed over 14,000 pieces of medication and endured terrible side effects, including paralysis, Parkinson's symptoms, depression and the prospect of infertility.

“Louie was eventually cured, but the toxic treatment left her blind. In her words, she felt 'worthless'. It took a lot of soul-searching for her to find a new purpose in life, but she is now a qualified architect, she has a master's in disability policy, she is married, she has a daughter called Zoe and she is a passionate advocate for tuberculosis patients.

“Her story really struck home. Not only did I learn that tuberculosis is not just a disease of the lungs but Louie's story showed how tuberculosis can strike healthy, active, professional people and change their lives forever.

“TB is not just a social tragedy; it is also an economic tragedy.”

The event was followed by the Parliamentary Launch of the Australasian TB Forum, a collaborative network of policy makers, health workers, researchers, people affected by TB and advocates working to end the TB epidemic in the Asia-Pacific region.

Dr Stenard Hiasihri, a practicing doctor from the Western Province, told of his challenges and frustrations in trying to treat tuberculosis patients, describing the disease as “Ebola in slow motion”.

“His experiences in having to diagnose patients using out-of-date technologies and then struggling to administer toxic drugs for anywhere between six months and two years reinforces that we must get effective vaccines, better diagnostics and more-efficient treatment.”

The Australian Government has directly responded to this focus, with Foreign Minister Julie Bishop pledging an additional $30 million over three years to help bring new diagnostic tests and drugs to the market to tackle drug-resistant tuberculosis and malaria.

“The theme for World Tuberculosis Day in 2015 is 'Reach, Treat, Cure Everyone',” Mr Entsch said. “It’s ambitious, but it has to be. As Dr Hiasihri and Louie Zepeda said yesterday: 'Imagine our children growing up in a world without tuberculosis.'”

Mr Entsch committed to continuing to work with the Cairns-based Reef and Rainforest Research Centre on advancing their $1.85 million pilot project, which will establish four service platforms in key villages along the Western Province coastline of Papua New Guinea.

“Lastly, I’ve also accepted an invitation to become the Australian Government representative on the Global Tuberculosis Caucus and have been invited to attend the 2nd Global TB summit at the end of November in Capetown.”