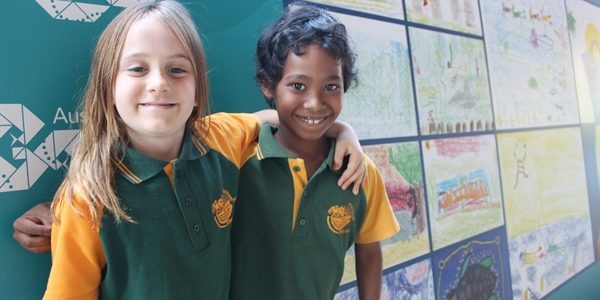 The students, from years prep to eight, were awarded at a ceremony at the Cairns Convention Centre today, where preparations are well underway for the weekend’s G20 Finance Ministers and Central Bank Governors meeting.

Their artworks, as well as the artworks of dozens of other students from across Far North Queensland, are on display as part of a huge 70 metre mural erected at the Convention Centre.

Mr Hockey thanked all of the students who entered and said the winning artworks were of a very high standard.

“I’m blown away by the talent and creativity on display here in Cairns,” Mr Hockey said.

“There’s no better way to see this magical part of the world than through the eyes of our children.

“I know visiting delegates will be as impressed as I am by such a bright and colourful welcome.”

Mr Entsch said the mural showed the great pride and affection of local children for their home state.

“This mural is a credit to our children’s creativity and imagination,” Mr Entsch said.

“Their art represents what they love about our tropical far north ? from its wonderful beaches, to its tropical rainforest, parks, wildlife and reef.

“It’s the perfect snapshot of what delegates will see when they arrive in the coming days.”