SANTA ON THE REEF FOR CHRISTMAS 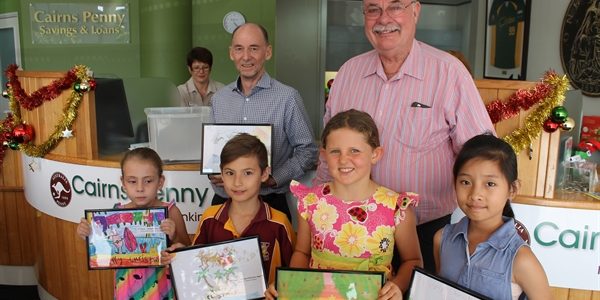 PRIMARY school children across Far North Queensland are being encouraged to join in the fun and participate in this year’s Leichhardt Christmas Card competition run by Federal MP Warren Entsch.
The theme for 2017 is ‘Santa On The Reef’.

Mr Entsch said the Great Barrier Reef is one of our regions greatest natural gifts and it’s only fitting that it should play a star role during the festive season, and the competition now in its eighth year.

“I urge all children aged between 5 and 12 to send me their best drawings or paintings depicting Santa on the Reef,” Mr Entsch said.
“The winning art works will be featured on my annual Christmas card which is sent to all my Parliamentary colleagues and contacts in FNQ.

“The Reef offers so much fun for snorkelling, diving, sailing, fishing and exploring coral and sea life, amongst other activities, and I’m certain Santa would love to visit our sparkling turquoise waters during the festive season,” Mr Entsch said.

Mr Entsch has thanked Cairns Penny for sponsoring the competition once again.

“Cairns Penny has been involved with this competition since the beginning, and we’re very pleased to be able to support local kids and their creativity at this special time of year,” Mr Phillips said.

Schools will receive the application forms and conditions of entry this week so that children can start designing their entries. The competition will close at 4pm on Friday, 27 October 2017.

Forms can also be collected from Mr Entsch’s office at 200 Mulgrave Road, from Cairns Penny at 22/24 Grafton Street, or downloaded from www.warrenentsch.com.au/.

All entries should be dropped off at Mr Entsch’s office at 200 Mulgrave Road, Cairns or posted to PO Box 14, BUNGALOW, QLD, 4870.

All designs must be original, in landscape A4 format, and come complete with an application form attached, as all entrants will receive a personalised Certificate of Appreciation.

Entries will be displayed at Cairns Penny throughout the holiday season.