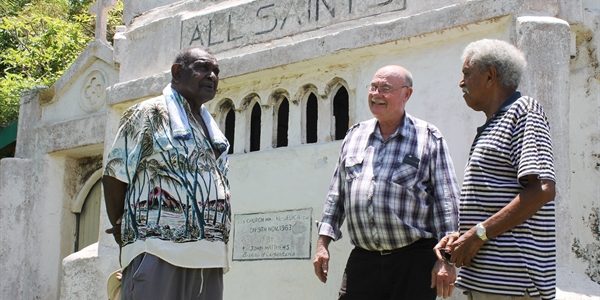 THE island of Erub (Darnley), in the easternmost island group of the Torres Strait, has a population today of around 300. It is a lush, hilly outpost that is quite beautiful.

Fish traps made of stone form striking patterns on the surrounding reefs where the waters are every shade of turquoise. Coconut palms fringe the sandy beaches, colourful fishing boats line the foreshore, and schools of sardines blacken the shallows.

Islanders have lived here for generations, a simple life where traditional customs and beliefs were strong.

Like so many remote communities today though it suffers from the departure of its young people to the cities, high cost of living, few employment opportunities and welfare dependence.

There is however an active Arts Centre, where intricate works are created from recycled ghost nets and exhibited in Singapore and Monaco, and Erub boasts the Torres Strait’s only community-based commercial fishing operation.

Visiting the island earlier this year to catch up with local leaders, I was struck by the worn beauty of one particular building ? the All Saints Anglican Church.
The building represents a significant period in Torres Strait heritage, when Christianity was brought to the region.

The London Missionary Society arrived in the Torres Strait on the vessel HMS Surprise, led by two Englishmen, Reverends MacFarlane and Murray.

They landed at Erub on 1st July 1871 and this first contact between islanders and missionaries came to be known as the ‘Coming of the Light’.

Dabad, one of the tribal elders of the island, befriended the missionaries and introduced them to the rest of the Islanders.

His role in the bringing of Christianity to the Torres Strait is recognised by a monument which reads “In loving memory of Dabad 1871: A man who denied his tribal laws and accepted the good news of salvation”.

In 1872 the London Missionary Society revisited the islands, reporting that weekly services were being held at Erub, conducted in a Pidgin form of the local language.

By 1890 the London Missionary Society was beginning to slow its operations in the Torres Strait and by 1914 the Anglican Church assumed responsibility for the Mission. They initiated annual ‘Coming of the Light’ celebrations; a tradition which continues today.

The All Saints Church was built in 1919 using locally-produced lime from burnt coral and basalt, under the direction of an Erub Islander named Mamai and a South Sea Islander named Albert Ware ‘Wamo’.

It is full of character ? from the baptismal font which is made from a giant clam shell and dedicated to Albert Ware, to a beautiful stained glass window installed in 1964 in memory of the first priest, Father Joseph Lui.

The base of the altar is inlaid with local pearl shells, while faded icons adorn the walls and the pulpit is made from the bow of a wooden fishing boat.

Current church wardens Walter Lui and Dick Pilot recall stories of how the church was built “upon the sweat of our great-grandfathers, grandfathers and fathers” and the integral role it played for much of last century.

“There was no big machinery, electrical tools or motorised dinghies back then – they had to row the dinghies and used hand tools such as picks, shovels, handsaw and hammers,” Mr Pilot says. “It was very hard work, a lot harder back then but the church was built for us – the Erub people – to have our regular worship services.”

Mr Pilot was baptised and confirmed in the church, and two of his uncles and one of his brothers were ordained Priests of the Anglican Church Ministry (the late Father Kabay Pilot, the late Cannon Boggo Pilot and Father Kabay Pilot (Jnr), retired).

Female family members were in the church choir and held positions with the Mother’s Union and Girl’s Friendly Society, while even the young girls and boys helped with cleaning work around the church and assisting elders in the community.

Mr Lui says the church was the centre for community events such as weddings, baptisms, confirmations and blessing of the crops.

“Rogation Sunday was a big event to celebrate and bless garden crops and also blessing of fishermen's tackle,” he says. “Many people gave freely of their time to organise events that would be attended by the whole community.

“During the time when many of the men left to seek work on the mainland, the importance of the church always stayed with them and they would raise money to send back for the church on November 1, All Saints Day.”

The church was renovated in 1963 when volunteers (Tom Manai, Titapo Oui, Jimmy George and the people of Erub) and local carpenters raised the roof. New louvered sections improved the airflow through the building in the days before electricity for lights or fans.

Since then however, the building has slowly declined from erosion, a lack of funds for ongoing renovation and maintenance work and a shortage of local skill-sets, and congregation numbers have dropped with additional churches in the community.

“The other churches still respect All Saints as being the mother church, but there are less people to now maintain the building. Being registered under the National Heritage Trust in 1992 has restricted the local maintenance that can be carried out,” says Mr Lui.

Both church wardens lament that the congregation has to attend other churches for weekly services, weddings, funerals and christenings, and that young children are missing out on their confirmation services. This has been compounded by not having a priest in charge.

“Having a place to worship would enable the Anglicans to faithfully worship. It would bring the Anglican community together again as a family,” says Mr Lui.

“To me and to my community it has very great significance as our grandfathers and fathers were the ones who helped with the construction work of the church, and we – the congregation of the All Saints – have to have our own place to worship,” added Mr Pilot.

As we approach the 100th anniversary of the construction of the church, the community is coming together and seeing the value of restoring the building to its former glory.

During my visit, I met with Cr Patrick Thaiday, the Torres Strait Island Regional Council representative for Erub, along with church wardens Walter Lui and Dick Pilot.

Despite the doors hanging on their hinges, the weed-ridden gutters, cracked plasterwork and boarded-up chancel windows, there is still grandeur about the Romanesque-style building. Tellingly, the surrounding lawns are kept neatly mown ? a sign of respect as the Erub parishioners wait patiently for the re-commencement of services.

There is certainly desire to see the building refurbished; congregations have now united from various churches on Erub and on mainland Australia for fundraising events. The islanders are keen to make sure that this project is carried out with their own hands but they need support and direction.

I think this project has potential to capture people’s imagination and there is a fantastic opportunity for businesses and communities to be associated with it. I’ve committed to help raise awareness among the broader Australian community along with metropolitan-based Anglicans who I’m sure will be inspired by this story.

We are putting a call out for volunteers with a broad range of skills along with donations of cash, expertise or materials. There is an immediate need for people with knowledge of Heritage-listed buildings because a full engineering assessment needs to be carried out to get a better understanding of the scope of works involved.

I’ve recently spoken to My Pathway, which runs Community Development Programme (CDP) activities on Erub, and they are keen to train up local jobseekers with the skills they need once these works are identified.

There is also early interest from the Erub Arts Centre in repairing and repainting the icons and interior fixtures, and ? thanks to a fortuitous meeting in Canberra ? from a national timber products organisation which is keen to be involved.

At the end of the day though, the local community must drive this ? they had the skills in the 1920s to build the church and in the 1960s to restore it, but the long-term future of the church relies on community members regaining these lost skills and taking ownership of its maintenance into the future.

As one community member told me; “Today we are not a dispossessed people, we are a proud people who still have our culture, language and we live on and occupy our Islands. To me the church is a very important part of our history and should be restored to its former glory.”

On 15th February 2019, let’s celebrate the church’s centenary and its full refurbishment thanks to the Erub islanders regaining their practical skills of the past.

I have no doubt there will be a huge amount of satisfaction in being involved with this project, please contact my office if you too can offer some form of support at warren.entsch.mp@aph.gov.au or 07 4051 2220.