Saibai Island Seawalls ready to hold back the tide 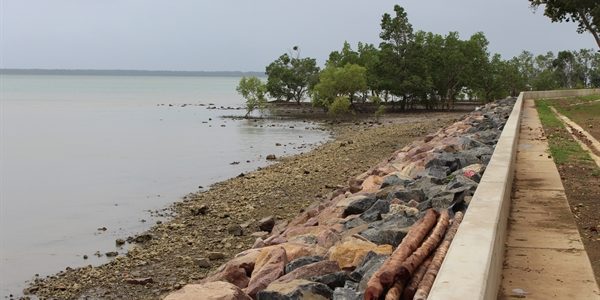 The Torres Strait community today celebrated the official opening of the $24.5 million Saibai project, which will help protect homes and critical infrastructure such as the school and airstrip.

Federal Minister for Indigenous Affairs Senator, Nigel Scullion, said this was an important achievement that would secure the safety and health of Torres Strait Islanders.

“Upon entering Government in 2013, the Coalition listened to what the community wanted and we ensured funding was allocated to secure the future of Saibai,” Minister Scullion said.

“The Coalition Government is working in partnership with local stakeholders in the Torres Strait to ensure infrastructure is being delivered and I am pleased to now see this project completed, as well as the boost to the local economy and local jobs.”

Federal Member for Leichhardt Warren Entsch said he had been actively working on this issue since the Coalition came to government in 2013, when a commitment had been made by the previous government but no money allocated for the project.

“It’s been a long but absolutely necessary journey and one that we have to learn from for the future, as we look to the other islands like Boigu and the central islands and the challenges they are facing,” Mr Entsch said.

“I look forward to working with Mayor of the Torres Strait Island Regional Council, Cr Fred Gela, in continuing this important work.”

The Saibai Island Seawalls are more than 2.28 kilometres long and include more than 1.8 kilometres of curved wave return wall which deflects the waves back into the water.

A further two kilometres of bund wall protects the health of the community with improved drainage.

“The completed works address tidal inundation and coastal erosion which affects the people on the island every year especially during cyclone season and king tides,” Minister Furner said.

“These are Queenslanders facing real risks to their homes and livelihoods as a result of the impacts of climate change, so to be able to provide a long-term infrastructure solution is a great win for this community.

“The Seawall not only protects the community from damaging floods but also provided jobs and training to seven local people during the construction phase of the project,” Minister Furner said.