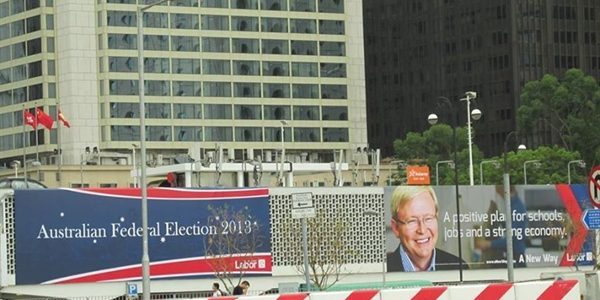 FEDERAL member for Leichhardt Warren Entsch has demanded the Prime Minister explain how he funded a “ridiculously large” Labor election billboard sighted at the Star Ferry Terminal in Hong Kong.

Mr Entsch was outraged when a photo of the campaign sign came across his desk.

“Kevin Rudd must come clean about where the money for this has come from,” he said.

“Did the Australian taxpayer fund this, on top of all his other advertising?

“That is on top of the $40 million Labor wasted trying to sell their failed mining tax and the more than $30 million used to advertise Rudd’s so-called PNG solution.

“It is clear by the sheer size of this sign and its prominent location that it would have cost an absolute fortune.

“This just reinforces the fact that Rudd simply cannot be trusted with taxpayer money.”

Mr Entsch said even if the unions funded the billboard, it was still a “ridiculous and unnecessary” cash splash.

“How many of Kevin Rudd’s own candidates would have given their two front teeth for a sign this size?” he said.

“It beggars belief that, as the nation’s debt skyrockets towards $400 billion under his leadership, he considers something like this a spending priority.

“Did he pay for this with the money he’s borrowing from overseas every day?”

According to the Australian Consulate-General for Hong Kong, around 80,000 Australians live in the Chinese city.

“Rudd continues to ignore the big issues here at home, like the increasing amount of asylum seekers arriving illegally off our shores and the failings of his PNG plan.

“Instead his priority is an easy, under-the-radar, vote grab from thousands of Aussie ex-pats.”

Mr Entsch said the Coalition’s focus was on building a stronger economy by cutting and abolishing unnecessary taxes and, putting a stop to Labor’s reckless addiction to spending.

“This election could not come soon enough, the Prime Minister is living on borrowed money, and borrowed time,” he said.