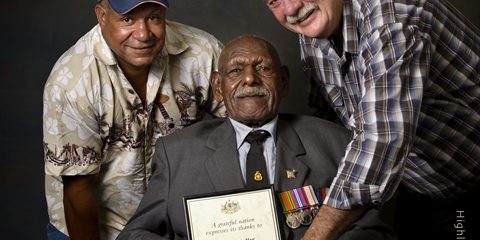 A PORTRAIT of one of the last remaining veterans of the Torres Strait Light Infantry Battalion will feature in a national project to recognise WWII servicemen, thanks to the efforts of local MP Warren Entsch.

The Australian Institute of Professional Photographers (AIPP) is embarking on an ambitious project titled Reflections, which aims to take a professional portrait of each of the 14,000 remaining veterans in Australia to commemorate the 75th anniversary of WWII.

Mr Entsch heard the project advertised on local radio, but when he contacted the AIPP head office they were not aware of the history or profile of the Torres Strait Light Infantry Battalion.

“I thought this was too good an opportunity to pass up,” Mr Entsch said, “as time is running out for us to be able to capture the images of the few TSLIB veterans who are still with us.

“The TSLIB played such an important role in supporting the defence of the Torres Strait against the Japanese forces, yet it was at a time when indigenous servicemen were still widely discriminated against in our society.

“Nevertheless, 870 young men of the Torres Strait put their lives on the line, and they were among the more than 150 servicemen who were killed during Japanese bombing raids in the Torres Strait.

“We must take the opportunity to photograph all surviving veterans and ensure their contribution is remembered in history.”

95-year-old Pvt Bamia Mast, who now lives in Innisfail, made the journey to Mr Entsch’s Cairns office on Wednesday with his son Eddie for the official portrait. He is one of only four known surviving members of the Torres Strait Light Infantry Battalion.

300 photographers around Australia are aiming to capture the images of 14,000 veterans in this major project supported by the RSL and the Australian War Memorial, Peter explained.

“All the photographers are volunteering their time and expertise, in the aim of creating a really important archive that will sensitively portray their elderly state and provide a poignant comparison to the images taken of young men and women at the time of enlistment,” Charmaine added.

Each of the veterans will receive, at no charge, a commemorative print in an embossed presentation folder to honour their participation, and the images will be archived with the Australian War Memorial in Canberra.

“This is our way of showing goodwill to the community and commemorating this important event.”

Peter urged any interested WWII veterans or their families to visit the AIPP website at http://www.aipp.com.au/about/the-aipp-reflections-project and register their interest.