PM takes part in historic visit to our region 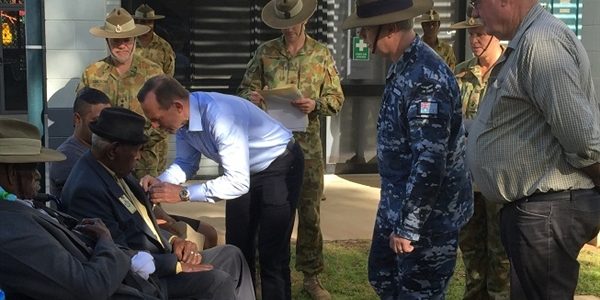 In August, the Prime Minister and other senior ministers visited a number of communities as part of a pledge to spend a week each year living and working in an indigenous community. For some of these, it was the first time they had been visited by a Prime Minister of Australia.
It was a fantastic opportunity to highlight a range of issues and opportunities in the areas of health, education and infrastructure, particularly the need for a permanent multi-agency base on Saibai Island to address immigration, biosecurity, and health and customs challenges.

But it was also a chance to hold a very special remembrance ceremony to recognise the service of the Torres Strait Light Infantry Battalion (TSLIB).

Three of the four surviving members – Pvt Bamia Mast from Innisfail, Pvt Mebai Warusam from Saibai and Pvt Palm Stephen from Broome – were honoured by the Prime Minister, who personally pinned Mr Stephen’s long-awaited medals to his chest in what was the culmination of an amazing story.

As the story goes, at age 15 Mr Stephen changed his name to ‘Palm Stevens’ and cited his place of birth as ‘Steppen Island’ so he could enlist alongside his four brothers, who were among the 870 enlisted Torres Strait Islanders in the TSLIB.  Coincidentally, the fourth surviving member of the TSLIB, 102-year-old Jerry Stephen, is Palm Stephen’s eldest brother – unfortunately he wasn’t well enough to travel to the Torres Strait from Cairns. This discrepancy in his Palm Stephen’s enlistment details meant that post-service, the army repeatedly denied that had fought. It was only earlier this year, when I got my hands on the old records and recognised the similarities in the names, that I put two and two together – there’s no ‘Steppen Island’ in the Torres Strait, and members of the Stephen family spell the surname with a ‘ph’ not a ‘v’.

I applied for Mr Stephen's medals and brought them up just in time for the Thursday Island event – so more 70 years after he fought for the nation, Mr Stephen – now 86 – has finally been recognised by the Australian Defence Force for his efforts during WWII.

As the Prime Minister told the ceremony:

‘‘If volunteering to serve is the ultimate mark of commitment to country and patriotism, no part of Australia has been more patriotically Australian than the Torres Strait and its citizens.
‘‘At a time when Indigenous people were not even counted in the census, Australia could count on Indigenous people.’’