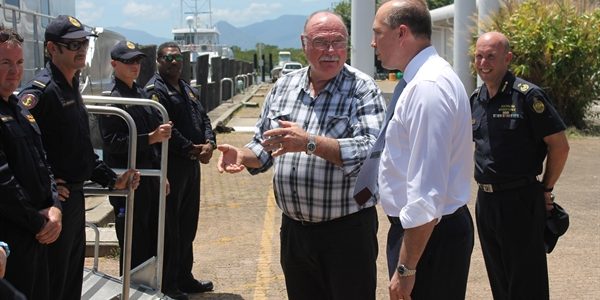 The Australian Border Force (ABF) will bolster its capabilities in Torres Strait and Far North Queensland (FNQ) with the stationing of a Bay Class vessel in FNQ to permanently patrol the region.

The Roebuck Bay has commenced its first patrol in the Strait after departing Cairns on Monday. It has undergone a substantial refurbishment in Cairns over recent months.

It is one of two Bay Class vessels the ABF is refitting for continued border patrols across Australia’s north.

The Storm Bay is currently alongside in Cairns completing a refit and will be deployed for operational duties from mid next year.

The Minister for Immigration and Border Protection Peter Dutton said the 38 metre Bay Class patrol boat fleet had been retired and replaced by the new Cape Class Cutters, but the ABF had decided to refit two of the vessels to bolster its capabilities.

“These vessels are suitable for multi-day patrols in and around the Torres Strait and the Great Barrier Reef region, as well as rapid response and multi-agency operations including search and rescue,” Mr Dutton said.

“The Torres Strait is a complex border environment given its proximity to Papua New Guinea. The consequential movement of people across this border means the ABF continually reassesses its capability and deployment of assets and personnel to meet the threats and challenges.”

The Member for Leichardt Warren Entsch welcomed the increased ABF presence in the Torres Strait.

“It’s great to see this asset coming back into the area and providing extra monitoring and security at an international border that is challenging for a whole range of reasons,” Mr Entsch said.

“I hope the basing of the Roebuck Bay in FNQ will also have a positive economic impact for the region.”

The ABF with partner agencies such as the Australian Federal Police and Queensland Police Service targets illegal foreign fishing, illegal maritime arrivals, cross border movement of prohibited imports and exports including firearms, the illegal movement of currency and the importation and distribution of narcotics.

Four other Bay Class vessels remain in service after being gifted to customs and border authorities in Malaysia and Sri Lanka.