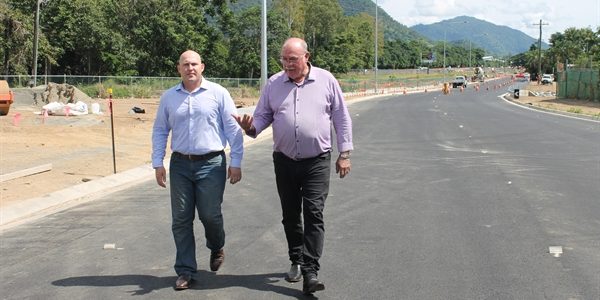 Today’s opening provides vehicles with an alternative to the Bruce Highway which connects all the way from Ray Jones Drive in Woree to Swallow Road in Bentley Park.

Federal Minister for Infrastructure and Transport Darren Chester said the Cairns Southern Access Corridor Stage 2 (Foster Road to Robert Road) project would be a vital link for the 36,000 motorists who drive into Cairns from the south each day.

“The project is part of our ten-year, $8.5 billion Bruce Highway Upgrade Programme which will improve safety, freight efficiency and flood immunity along this key stretch of road,” Mr Chester said.

“The Australian Government is committed to delivering real benefits to Far North Queensland through improving safety and reducing congestion as part of the important Bruce Highway Upgrade,” Mr Chester said.

Queensland Minister for Main Roads and Road Safety Mark Bailey the project would reduce congestion and improve safety, reliability and efficiency for motorists.

“This will provide another access point into White Rock via the traffic lights at the Robert Road and Swallow Road intersection.”

Federal Member for Leichhardt Warren Entsch said an average of 147 direct jobs would be supported over the life of the project.

“This is a classic example of building the right infrastructure to make life easier for residents and freight operators,” Mr Entsch said.

“The initial part of the service road linking Progress Road to Hargreaves Street has opened, with the remaining section expected to open in May. It’s a vital step in the overall project, which is expected to be completed later this year.”

Treasurer and Member for Mulgrave Curtis Pitt said that beyond the safety and time benefits for local motorists, the project was another critical part in the wider Bruce Highway program.

“The Cairns Southern Access Stage 2 will see the Bruce Highway widen from four to six lanes at the southern entrance of Cairns. I’d like to thank motorists for their patience throughout construction of this important piece of major infrastructure.”

The $58 million project is jointly funded with the Australian Government contributing up to $46.4 million and the Queensland Government $11.6 million.