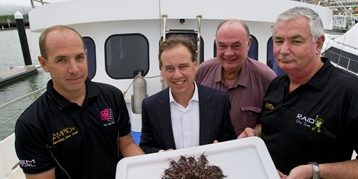 LEICHHARDT MP Warren Entsch has welcomed news that 250,000 crown-of-thorns starfish (COTS) have now been culled on the Great Barrier Reef due to a new control measure and additional vessel to combat the pest.

Funding for a second control vessel, Venus 2, and the development of a single injection method developed by James Cook University has immediately improved the efficiency and effectiveness of reducing COTS numbers on the Great Barrier Reef.

“The Crown-of-Thorns Control Program is a key element of the Government’s Reef 2050 Plan,” Minister Hunt said. “In recent decades COTS have been responsible for 42 per cent of coral loss on the Great Barrier Reef.

“Pollution and run-off entering the reef has led to an explosion in numbers causing considerable damage to the Reef.

Mr Entsch welcomed the success of the new method and congratulated the dive team onboard Venus 2 for their work.

“The new culling method has led to a four-fold increase in eradicating COTS,” Mr Entsch said.  “Divers deployed by the local Association of Marine Park Tourism Operators here in Cairns are finding they can cull over 1000 crown-of-thorns starfish on a 40-minute dive.

Mr Entsch said the program was not about eradicating the COTS in their entirety because they are part of the natural environment. “It’s about managing the areas where you get explosions in population ? they do huge amounts of damage and the reefs cannot sustain the pressure.”

Mr Moon said that in smaller numbers, COTS can benefit the reef as they eat faster-growing corals, enabling slower-growing species to flourish and encouraging diversity on the reef.

“Currently we have a situation where the numbers are out of control, so they are not just eating the fast growing coral, but all of the coral – marching through and wiping out whole reef systems. That’s why it’s absolutely critical that we control these numbers now.”

Other measures under the Reef 2050 Plan over the longer term will see improvements to water quality entering the Reef, further limiting the COTS thriving in its larval stage on water-borne algae which results from nutrient-rich waters.

The protection and management of the Great Barrier Reef is a priority for the Government and Australians can be proud of achievements to date in protecting this icon.

*Thanks to GBRMPA for this image