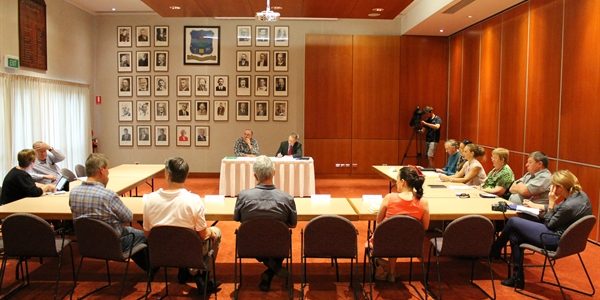 MOBILE phone black spots in Leichhardt have come under the spotlight today with Leichhardt MP Warren Entsch hosting a roundtable for key community representatives with Paul Fletcher MP, the Parliamentary Secretary to the Minister for Communications.

“These range from Trinity Beach to Mossman-Daintree, Mt Carbine right through Cape York to Bamaga, from Kuranda and Speewah on the Tableland to Oak Beach and the Torres Strait.

“These have all been passed onto the Department but it was great for Paul Fletcher to hear firsthand from council and affected community representatives as to exactly what needs to be done.”

Mr Fletcher has been to many community meetings around Australia to gather community feedback on mobile coverage issues and to discuss how the Programme will operate.

“The input received today will be included in the database we are maintaining of areas reported to have poor or no mobile coverage,” Mr Fletcher said.

“Lives can literally depend on accessing mobile phone networks in emergencies, so expanding mobile phone coverage has clear benefits to public safety ? as well as to the business capacity of the local communities in Leichhardt,” Mr Entsch said.

The Government is accepting nominations of mobile black spots until mid-July 2014. Anyone wishing to report a mobile black spot can email mobilecoverage@communications.gov.au and CC warren.entsch.mp@aph.gov.au