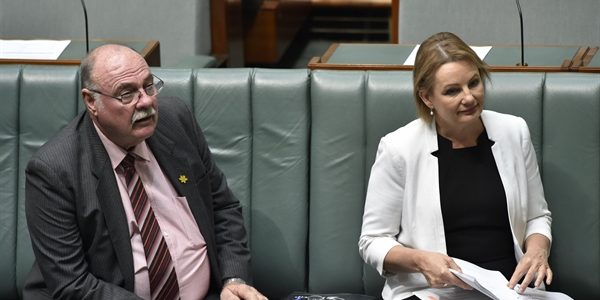 LEICHHARDT MP Warren Entsch has welcomed the passing of the Bill in the House of Representatives last night that will allow the growing of cannabis in Australia for medicinal and research purposes.

The Bill will now go to the Senate, where it is expected to pass with cross-party support by the end of this autumn sitting period.

“It’s a very significant day when medical cannabis is acknowledged as being a product that makes a real difference to people suffering from chronic conditions or terminal disease,” Mr Entsch told Parliament in a speech late last night.

“It will mean that patients and their family members will no longer have to hide in the shadows to source cannabis off the street. They will have a pathway to access safe and effective product and to access that product legally.”

In his speech, Mr Entsch paid tribute to the many people who “have contributed in so many ways to my journey of acknowledgement and recognition of the properties of this product”.

He cited the case of his late brother-in-law, Joel Garrett, who was diagnosed with MS at the age of 28. When, towards the end of his life, he suffered uncontrollable shakes, medicinal cannabis was the only thing that gave Joel the relief that he needed until his passing on 21 June 2005 at the age of 33.

“It gave him a quality of life that he could achieve from nowhere else, and this was right up until the day he died. I know for a fact that Joel will be up there somewhere saying, 'At last they've recognised it,' and he would be greatly appreciative of what we are doing here.”

Mr Entsch also recognised the very strong advocacy of Lucy and Lou Haslam, who were forced to access cannabis as a last resort to relieve their son Daniel's severe chemotherapy-induced nausea, and shared that story with all of Australia.

“I also spoke to Lanai Carter in Brisbane. She told me about her family's trips backwards and forwards to the United States to access treatment for her son Lindsay, and the benefit it had for his brain tumour-induced seizures, as well as their ongoing challenge in navigating the TGA's Special Access Scheme.

“While they are anecdotal, these stories reinforced my understanding of the benefits of medical cannabis.”

Mr Entsch was also assisted by a large number of specialists and professionals in the field, including:

• Dr Alex Wodak, Emeritus Consultant for Alcohol and Drug Service at St Vincent's Hospital and President of the Australian Drug Law Reform Foundation;
• Dr David Caldicott, head of the emergency department at Calvary Hospital;
• Dr David Allsop, research fellow at the School of Psychology at the University of Sydney;
• The Therapeutic Goods Administration;
• Debbi Cliff, a patient advocate in Cairns; and
• The Queensland state LNP convention, which rallied support at the state level.

Mr Entsch said that while he had received a huge amount of support from all over Australia, he was particularly touched by the local families who contacted him – desperate for an opportunity to access medicinal cannabis in a safe, legal and regulated way.

‘I have been tempted many times to consider trying cannabis for Elyshia. But the risk of getting caught for doing something illegal stops me. It would be so much safer under the supervision of a doctor … Thank you for supporting the needs of sick children.’

“Also in Cairns, Jodie Higginson's nine-year-old daughter, Kiara, has a rare form of epilepsy called Jeavons syndrome, which causes hundreds of light-triggered seizures every day. She is on constant medication, which causes side effects and severe reactions. Jodie said:

In closing, Mr Entsch commended the advocacy of the Cross Party Group on Drug Policy and Law Reform, particularly Dr Sharman Stone MP, Senator Richard Di Natale and Melissa Parke MP, and offered his “heartfelt congratulations” to the Minister for Health, Sussan Ley MP, for her work to introduce this bill.

“Today I am very proud to support legislation which will have a profound, positive impact on so many Australians' quality of life,” he said.